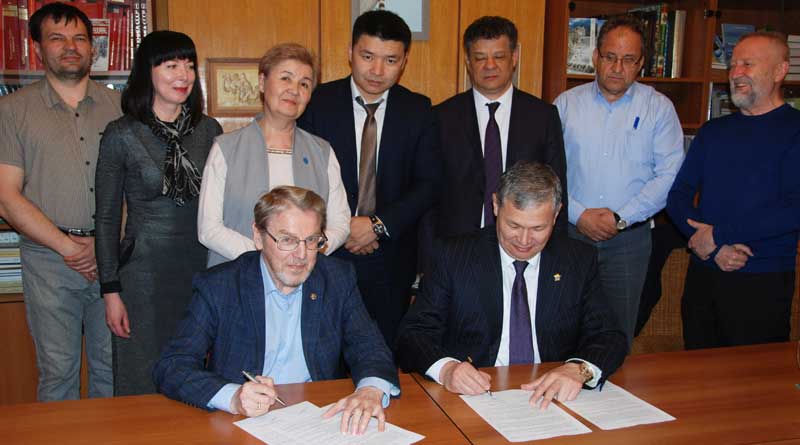 The Caspian seal is on the verge of extinction. For 100 years, the abundance of the only marine mammal in the Caspian Sea has reached a critical threshold, declining from a million individuals to 100 thousand. How can we save the endangered population? An agreement was signed in Moscow on the start of a program for cooperation between our two countries. Russian scientists and oilmen of Kazakhstan initiated joint research, comprehensive environmental monitoring using innovative technologies.

Challenges for preserving the entire Caspian ecosystem can only be solved by the joint efforts of all the Caspian states. The intensification of cooperation between the scientific community of Kazakhstan and Russia in this direction is a good sign.

The largest oil producing company in the Caspian region, North Caspian Operating Company N.V. (NCOC N.V.), developing Kashagan oil and gas field, one of the largest in the world, has supported cooperation and joint research proposed by scientists of A.N. Severtsov Institute of Ecology and Evolution (IPEE RAS) – a leading research organization of the Russian Academy of Sciences.

Top managers of the transnational oil producing company from Kazakhstan and Russian scientists met at IPEE RAS, a legendary institute whose historical building decorated with plaques with the names of luminaries of science, to discuss the action plan. IPEE RAS became the coordinator of joint research of Kazakhstan and Russian organizations focused on Caspian seal population issues.

The meeting in Moscow is a result of over half a year preparation. Video conferences and meetings were held in Almaty and Nur-Sultan. From the Kazakhstan side, scientists from the Kazakhstan Agency of Applied Ecology (KAPE), the Kazakh Research Center of Fishery, the Institute of Microbiology and Virology of the Committee of Science at the Ministry of Science and Education of the Republic of Kazakhstan, experts from the Committee on Forestry and Wildlife are involved in the Caspian program. From the Russian side, in addition to the IPEE RAS, research will be carried out by specialists from the All-Russian Research Institute of Fisheries and Oceanography, and other organizations. Provisions on scientific cooperation and interaction, a draft program for studying the Caspian seal population have been developed. A reporting system and an electronic database will be created. It is important that scientists from all over the Caspian region join in this work of Kazakhstan and Russia. Of course, it is very important that in future Russian companies involved in the development of hydrocarbons in the Caspian Sea engage in dealing with the problem. Cooperation is important for the implementation of measures recommended by scientists.

– Interaction of the Kazakhstan Agency of Applied Ecology and a leading oil producing company in the North Caspian with the leadership of A.N. Severtsov Institute of Ecology and Evolution of the RAS will be useful in preserving the Caspian seal and its habitat. This is also useful for the development of relations between Russia and Kazakhstan in the field of science as a whole.

It was no coincidence that we chose the Russian institute; it has a rich history and impeccable reputation. The successful experience of IPEE RAS in saving the Persian leopard and Amur tiger is well known. Caspian seal problems need to be solved together. It is important to identify the root causes of the decline of the Caspian seal abundance. I hope that an example of such interaction will turn out to be useful to other nature users, corporations that feel responsible for maintaining the ecological balance and the rich biodiversity of the Caspian Sea. The Caspian seal at the top of the food pyramid, if we lose it, an irreversible process will occur in the biological hierarchy of the Caspian Sea.

Viatcheslav Rozhnov, Doctor of Biological Sciences, Academician of the Russian Academy of Sciences, Director of IPEE RAS, the Head of the Caspian Seal Study Program of Russia and Kazakhstan.

– We have a difficult task in front of us. The status of the Caspian seal population is alarming. There is still time to help this species and the ecosystem. Science does not stand still. Several years ago, we developed technologies for the restoration of rare species, and applied effective methods to save populations of endangered animals. Our team includes zoologists of different specializations – genetics, toxicologists, parasitologists. The major principle is to use research methods that do not harm animals. Today, for example, several hair samples taken from a seal can tell you what this animal ate at different ages, its hormonal status. The main thing is to conduct research in time and determine the action program. Scientists of our countries will study the migratory routes of Caspian seals. They are able to swim up to 70 km per day, moving throughout the Caspian Sea. Seals can be found off the coast of Turkmenistan, Azerbaijan, and Iran. By the way, Moscow hosted the representatives of environmental communities and institutions from all the Caspian states. The Caspian seal is our common wealth.

Natalia Shumeyko, Coordinator of the Caspian Seal Study Program of Russia and Kazakhstan.

– We are grateful to NCOC N.V. for organizational and financial support of the proposed scientific program for the study of the only marine mammal in the Caspian Sea. Since 2008, the Caspian seal has been on the International Union for Conservation of Nature’s Red List of Threatened Species with an endangered status. It is listed in Red Books of Azerbaijan and Turkmenistan, and also protected in Iran. In Kazakhstan, the Caspian seal was excluded from the list of species for commercial hunting. In Russia, the Caspian seal is proposed to be listed in the Red Book of the Russian Federation.

Migrating throughout the Caspian Sea, seals concentrate in its northern part for breeding; they stay in Russian and Kazakhstani waters for several months. Our common research, which we plan to start this summer, is an important step in settling problems with the species and the Caspian ecosystem as a whole.

– Since 1993, our company has been conducting systematic studies on the ecosystem status of the Kazakhstan sector of the North Caspian. The most important factors affecting the Caspian seal abundance are the sea level decline, reduction in ice area due to warming, animal death in fishing nets, outbreaks of infectious diseases, reduction in fish stocks, marine pollution, and depletion of the food stock caused by an invasive species – the comb jelly (Mnemiopsis leidyi). Being not native to the Caspian Sea, this ctenophore destroys the food stock, namely zooplankton, which many fish species feed on. It has resulted on dramatic decline in the population of sprat, and predatory fish species and the Caspian seal feeding on it. There is no exact answer to the question of the Caspian seal population abundance today. We are to clarify these data together.

Since the Caspian Sea is the ecosystem with a high number of rare and endemic species that inhabit only this water body, the protection and preservation of unique biodiversity in this area is of our common priority.

Source: the Embassy of the Republic of Kazakhstan to the Russian Federation.