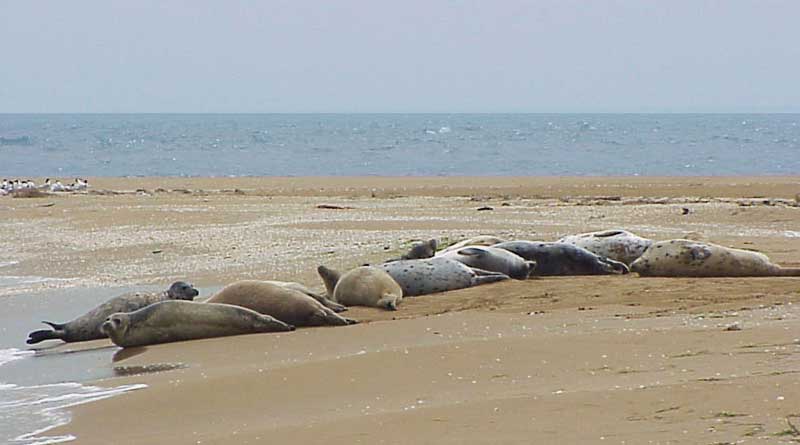 The Caspian seal is endemic to the Caspian. In waters adjacent to the Turkmen coast, seals occur throughout the year, but their number varies. From spring to summer, most of the seal population migrates to the Southern Caspian after breeding and moulting on ice. Seals feed intensively and lead a pelagic way of life in summer (Badamshin, 1969; Krylov, 1976). From ten to hundred seals can be recorded on Mikhaylova Island and Ogurjaly Island (Ogurchinskiy Island), the Turkmenskiy Bay, and on Osushnoy Island, the Krasnovodskiy Bay (the Turkmenbashi Bay – Kaspika’s note), at this time (Chapskiy, 1976). In Turkmenistan, a total of about 15,000 seals were observed on the islands (Bychkov et al, 1985). According to Krylov (1986), there were from 3 to 7 thousand seals on the southern spit of Ogurchinskiy Island and Mikhaylova Island until March. They were mostly immature. In 2007, the number of seals in the Turkmen sector of the Caspian Sea amounted to about 1,000 individuals (Erokhin, 2011).

In 2002, breeding seals were observed on Ogurchinskiy Island, whelping began in the second decade of December and lasted until mid-February. The age and sex of 170 seals on the island was as follows: males – 20 %; females – 25 %; immature individuals of both sexes – 55 %. There were 14 pups. Observations of Caspian seals on Ogurchinskiy Island were continued in 2008. From April to July, we conducted the survey of their numbers on this island three times a day: from 6.00 to 9.00, from 12.00 to 14.00 and from 17.00 to 19.00. A small number of seals (more than 350 individuals) occurred in mid-April and more than 200 seals at the beginning of May and the same number – in June.

In late June and early July, there were no seals on the island or only a few individuals could be seen. That was due to the fact that most seals were in the sea, where they were intensively feeding. According to fishermen, seals usually appeared on Ogurchinskiy after the 2nd decade of September.

We also carried out the behavior of seals, being at a distance of 20 to 100 meters from their main haul out site. Caspian seals showed practically no signs of anxiety, only when you sometimes had to get up to take a picture, they raised their heads. In the absence of any disturbance, a group of seals could lie on the shore for more than 2 days, and only 20-30 percent of the animals swam to the sea for feeding. The seals returned to the island from all sides at about 16 o’clock, and the greatest number was recorded at 20-21 o’clock.

The main factors of disturbance on the island were fishermen passing by its southern tip, close to the shore.