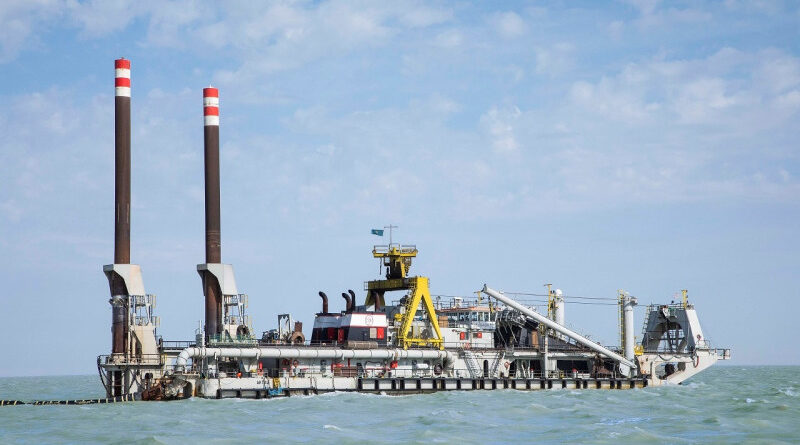 On June 30, 2022, NCOC held a round table in Atyrau, Kazakhstan, jointly organized with the Zhaiyk-Caspian Aarhus Center in order to inform the public on the progress of dredging activities in the northeastern part of the Caspian Sea to support Kashagan offshore operations.

Dredging began in the spring of 2021 due to operational needs, mainly to ensure evacuation of personnel in case of an emergency at the Kashagan Field and access of marine vessels to NCOC facilities. Total length of the dredging area is 56 kilometers.

These activities were required as a result of the Caspian Sea level falling and its shallowing in the area around the Venture’s offshore facilities, which puts at risk the safe operation of the Kashagan offshore complex.

Dredging is performed in the Caspian Sea within the Contract Area of the Production Sharing Agreement in Respect of the North Caspian. The activities are carried out outside the restricted use areas, the Akzhaiyk State Nature Reserve, spawning and migration zones of sturgeon fish, fishing areas, nesting areas and seal concentration hot spots and outside the pupping season on ice.

NCOC commenced these activities after conducting an environmental impact assessment approved as part of the project documentation, and preliminary discussion of the project with the public and government agencies.

As of the end of June 2022, the completed section’s length is about 44 kilometers, and the width of the navigation route is 80 meters. Dredging in the vicinity of D Island, which is the largest one at the Kashagan field, has been completed. The activities utilize three cutter suction dredgers and one mechanical dredger, as well as the “cooking pot” technology, which allows reducing water turbidity by several fold.

It should be noted that NCOC continuously monitors the contractor’s execution of works as per specified project parameters and effectiveness of mitigation measures, which include special underwater placement of berms, monitoring of water turbidity, and monitoring of the impact on biota. Observations are carried out at baseline stations and in the dredging areas.

The results of the 2021 summer and autumn studies demonstrate no significant impact of dredging on zooplankton communities of the water area along the Western Access Channel. The ichthyofauna data also do not show negative trend during the subject period.

According to NCOC HSSE Director Ualikhan Zhanaissov, dredging is a method previously used in the Caspian Sea. The results of comprehensive monitoring of the project’s impact confirm the conservative impact and conclusions of scientific institutes, Kazakh and Russian scientists on a fairly low impact of the project on the state of benthos, phytoplankton, zooplankton, avifauna, ichthyofauna and the population of the Caspian seal.