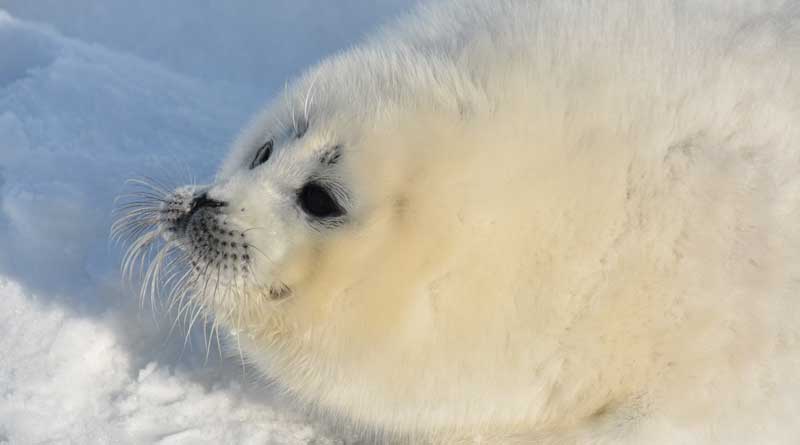 Employees of KaspNIRKh (now the Volga-Caspian Branch of the FSBRI VNIRO) have spoken about the winter aerial survey of Caspian seals in 2012.

A newborn pup is covered with fur of greenish tint. This colour disappears in a few hours. The next stage, when the pup’s fur is of yellowish tint, has lasted for one or two days. Then fur turns white (at this time, the pups are especially charming). Ten days later, animals start molting – long hair is replaced by short. Two weeks later, when babies have molted, their fur is of silver-white colour and short, like adult animals have. Scientists of KaspNIRKh managed to observe all these stages during the research flights over the Caspian waters in February.

For the first time in more than two decades, the specialists of KaspNIRKh together with the employees of the Research Institute ‘Giprorybflot’ under the leadership of Vladimir Chernook conducted an aerial survey of the Caspian seal population abundance. To obtain data, a specially prepared L-410 aircraft was used, equipped with a modern instrument base, which provided visual observation, photography and thermal imaging.

The participants in these flights were employees of KaspNIRKh: Vasily Kuznetsov, a researcher at the Marine Fish Laboratory, a Caspian seal executive, and Vladimir Yanchenkov, a researcher at the Semi-passage and River Fish Laboratory, who had significant experience in marine mammal researches. Their work was supervised by Sergey Shipulin, Deputy General Director for Science of KaspNIRKh. ‘6 flights have been made. It is over 25 hours in air. We have received exclusive data. If we use the data of visual observation, photographs made in visible and infrared spectrum, the underestimation of the seal, which occurs only during visual observation, is minimized,’ Vasily Kuznetsov speaks without stealing his joy.

Similar researches of the Caspian seal were conducted in 1989. There are several reasons for such a long break. And first of all – the cost of one hour of flight, which has become extremely high. ‘We know from archival data that an hour by helicopter cost 80 rubles in Soviet times,’ said Vasily Kuznetsov. This was quite commensurate with the average salary of that time. If we compare the current cost of an hour in the sky, it will exceed the income of an average resident of Astrakhan by tens of times.

‘Another reason why such studies have not been carried out in recent years – when the economy collapsed in the 90s, fishing also collapsed,’ the scientist continued listing the reasons, ‘From 2005 to 2008, almost no seals were hunted. One of Dagestan entrepreneurs was engaged in this, doing it spontaneously and occasionally, incurring losses. But if you trace the entire history of sealing since 1867, it was also spontaneous at that time. Sealing gained greater stability in the Soviet years, when the state took control of it. The Soviet state funded researches being regularly conducted. For example, there was a flight service operated at our institute, which was engaged in both counting of seals and guiding sealing vessels to their large haul-out sites.’

Arguments in defense of research are known. The “green” public has been trumpeting for ten years that the Caspian seal is on the verge of extinction and it is time to save this unique species. ‘Firstly, the Caspian seal is unique as it is the only species of marine mammals in the Caspian. It is located at the top of the trophic pyramid. If seal suddenly becomes extinct, the natural balance will be violated, which will cause unpredictable consequences,’ Vasily Kuznetsov agrees with the uniqueness of the Caspian seal.

For practical people, scientists have their own arguments. This aerial survey was carried out to determine the percentage of seals that would be allowed to kill without harming the population.

‘There is no sealing now. Several years ago, the commercial hunting was only on pups to get their fur. And now we have to start hunting on the adult part of the population, especially on sick and weakened animals to obtain seal oil. This is a wonderful preventive and therapeutic agent for tuberculosis. It is no secret that this disease is common in the Astrakhan region,’ explained Vladimir Yanchenkov. In addition, Astrakhan scientists have evidence that cosmetics containing seal oil has a rejuvenating effect on human skin. Moreover, the cost of such products will be affordable for a wide range of people. A substance extracting from the heart of a seal has a beneficial effect on the cardiovascular system. Scientific research on the use of seal products in other fields, not only in medicine, is being carried out.

A federal program for the development of the fishery is currently being prepared, which provides for the organization of a processing base in the area where Caspian seals have long been hunted – in Dagestan. In this program, there is a subparagraph on providing the Caspian basin with two vessels for sealing. Those sealing vessels of ice class, which used to work here, were either sent to other pools or sent to waste. ‘The conducted researches are necessary to clarify the available resource base for the implementation of the program,’ said Sergey Shipulin.

The Astrakhan scientists are not going to stop on the work done. In their opinion, after receiving data from the aerial survey, the next step would be the conclusion of an intergovernmental agreement between all the Caspian states and the development of a joint program for the study and conservation of the species.

‘Each Caspian country should contribute to the study of this animal,’ insists Vasily Kuznetsov, ‘But so far only the Russian Federation is conducting such studies using a state approach. The research on the Caspian seal population in this year is just a small step to great accomplishments.’

Note
In 2020, according to information on  the Volga-Caspian Branch of VNIRO web-site, Sea Tech and Cadmatic, Ltd began to build an icebreaker class fishing trawler for the Caspian (Russian Project T30V).

The increase in fish catch requires building a fish processing enterprise in the Republic of Dagestan. One of the potential investors of the project is the Baltic Coast Company, which General Director held negotiations with Artyom Zdunov, chairman of the government of the Republic of Dagestan in early 2019. It is expected that the new fish factory will be designed for 500 employees with wages over 35 thousand rubles.

On July 04, 2021, the State Oil Company of the Azerbaijan Republic (SOCAR) said that no accidents had occurred on