It so happened, that one of the representatives of this “profession” agreed to talk to me. From the base, where our company was resting, we drove to another district for this meeting a few hours. For obvious reasons, I cannot show the photo of my hero. I will only say that, having grinned, Vasiliy, a middle-aged man and a native of Astrakhan Oblast, introduced himself as a “hereditary poacher”. According to him, his grandfather, father and lots of men in the family were engaged in poaching.

Before I begin my story, I want to say about my own attitude to this phenomenon. I am obviously against poaching, like any normal person. I have been to Astrakhan for 8 years, noticing each year that the number of fish keeps reducing. Poachers, who hunt for black caviar, kill half a ton of sturgeon and throw it overboard for a trip. For a season, only one poaching brigade has destroyed almost 50 tons of sturgeon, which will not be found in a shop then. However, the problem is not only in the greed for profit of those fishermen who violate the law. It is deeper – in a low standard of living, lack of alternatives and monstrous corruption. Bribes for poaching are estimated in tens and hundreds of million rubles a year! But I tell you about all this step-by-step…

To talk about how poachers violate the law, it is necessary that these laws should be spoken about:
– Firstly, in order to catch fish on a commercial scale (the link), a special permit is required, which is issued by the Volga-Caspian Territorial Department of the Federal Agency for Fisheries. Each fishing season, fishermen-peasants get such permission and, only having a piece of paper on their hands, go fishing;
– Secondly, you can fish only at certain period called “putina”. There are 2 fishing periods in a year, in summer and winter. It is done for obvious reasons – fish should spawn and “rest” from fishermen;
– Thirdly, fishing process is strictly regulated, up to how many and what kind of fish is allowed to catch, how and where to catch it. Forbidden fishing gear (nets, hooks), violation of quota – this is poaching.

So, having arrived at the place, Vasiliy showed me forbidden gear – hooked tackles and nets. We got into a boat and went to the avandelta of the Volga River. Vasily showed me those “poryadky” (a few hooked tackles connected with each other with a rope), which were near the village – fishermen use them mainly for themselves, because near a village you cannot particularly catch a lot of fish. Accordingly, poaching can be divided into two types: home (when fish is caught to feed families) and commercial (when it is caught for sale).

On the way, Vasily pointed to a boat, ‘If you see a small boat with a powerful engine – it is likely to be poachers’ boat. Those, who are seriously engaged in poaching, hang on a boat two or even three engines. It is necessary to escape from border guards in the sea…

Vasiliy could not show me such a boat. No one holds it in the village, near their house, of course. However, on the Internet, there a lot photos of such boats confiscated by border guards.

Poachers’ boat is called ‘baida” in the Caspian Region. It is about 10 meter in length, and its draft is small. The design and shape of such a boat are intended to overcome the sea wave. The total power of a few outboard engines reaches 700 horsepower. This allows a boat to reach speeds of more than 100 km/h, even when it is loaded with a big catch, up to half a ton. According to Vasiliy, the cost of a normal poaching boat ranges from 300 thousand to one million rubles. An engine is the most valuable part of a ‘baida’ (it is bought separately). In a RIA Novosti report (at 1:34), there is an episode, which vividly illustrates it.

It possible to stop a poaching boat, only shooting through its engines; that is why poachers literally lie on them – border guards will not shoot people…

Where do the poachers keep their boats? Vasiliy said that, in the avandelta of the Volga River, every poacher has a hiding place, which is practically impossible to find without GPS. A baida is usually hidden on a small sandbank sprouted by reeds (‘kolka’) located in the avandelta – this water area stretches for tens of kilometers towards the Caspian Sea. Poachers choose a suitable ‘reed island’, drive four sticks into the bottom, pull ropes between them. The ‘box’ is ready. This box is tied with live reeds. Poachers do cut these plants, but simply tie them up to make a reed wall. The masking grid is pulled over, so it is impossible to notice the poaching boat from a helicopter.

In a previous articles “The Volga Delta seen from above” (the link to this article), I showed the avandelta from the air – imagine, how easy it is to hide a poaching boat here! 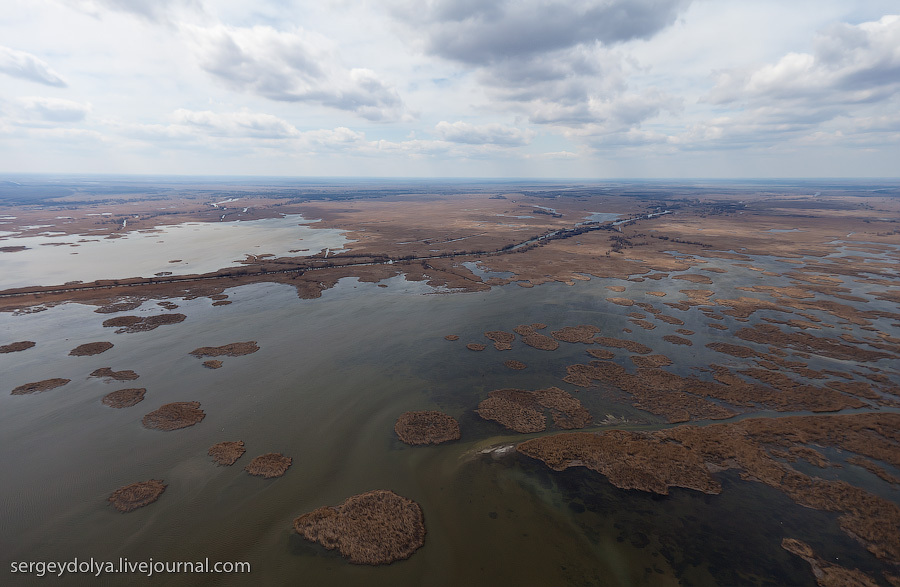 About commercial poaching in the sea, I will tell you in details a bit later. In the meantime, we went into a small anabranch (so called ‘yerik’). There were no identification signs on this place; Vasily said that he oriented, looking at trees. He took a special anchor, threw it into the water and began to float down the anabranch.

At some point, he hooked a ‘poryadok’ and picked it up from the water. A ‘poryadok’ is a hooked tackle. It is a rope, on which hooks are fastened. However, any bait is not put on sharply sharpened hooks – they just cling to fish when it passes by. Such a hooked tackle is set at an altitude of 1 centimeter from the bottom, and any fish that floats on the bottom inevitably clings to the hooks. 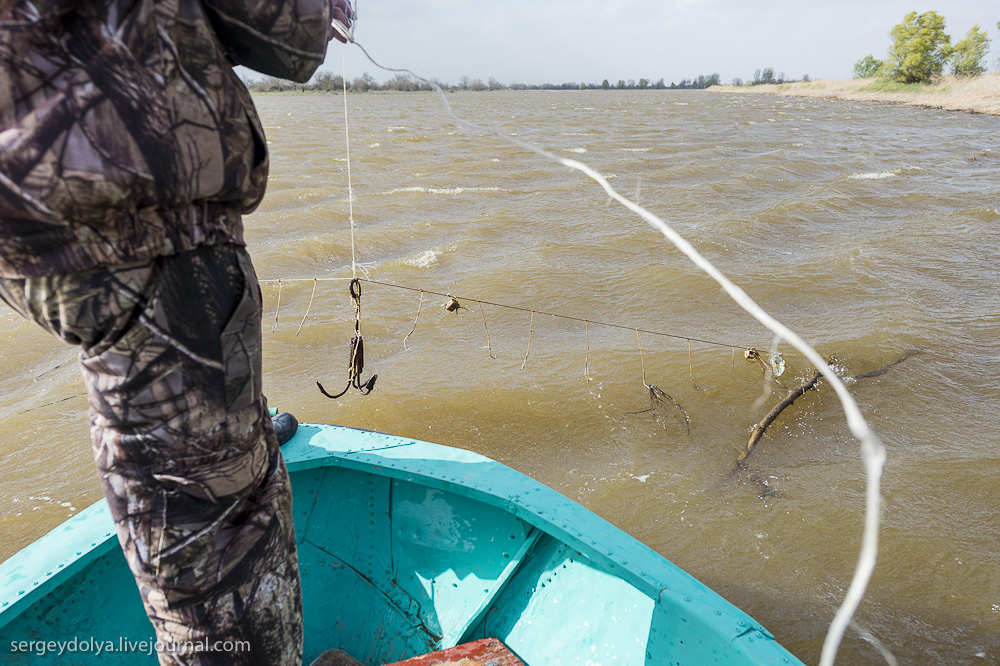 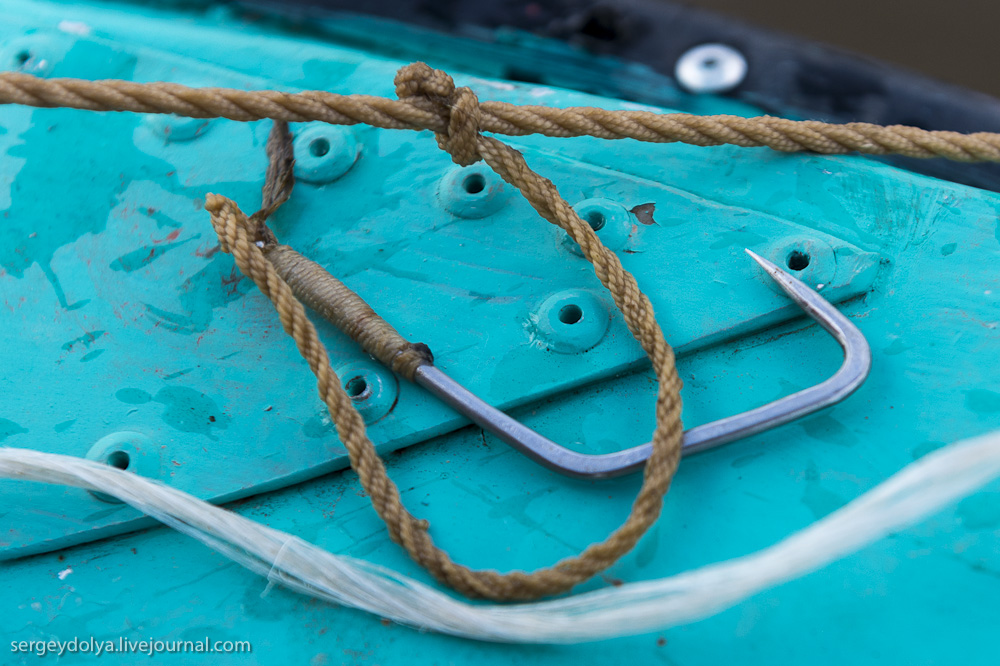 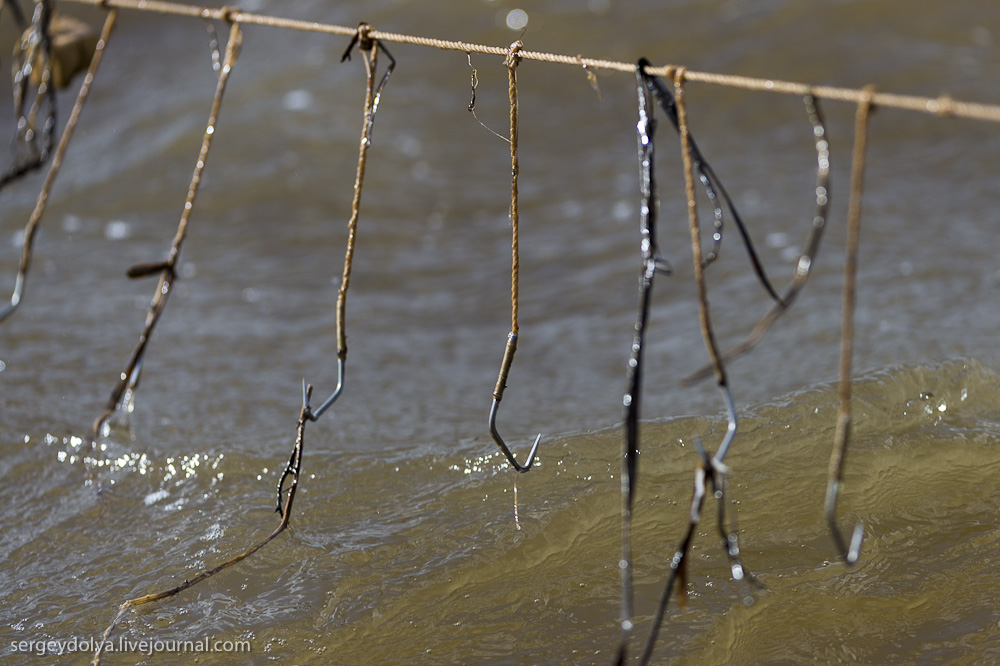 Tackles are ordered in Rostov. According to fishing superstition, the number of hooks should be odd – for example, if it turns out to be 90, another hook is added. Hooks are hung at a distance of 10 centimeters from each other. Vasiliy has two tackles of 71 and 91 hooks near his house, and check them every evening. Usually, one or two sturgeons are caught a day. But on the day of our trip, the whole catch consisted of two carps. The fish has been killed in such amounts that no fishermen’s superstitions help them. 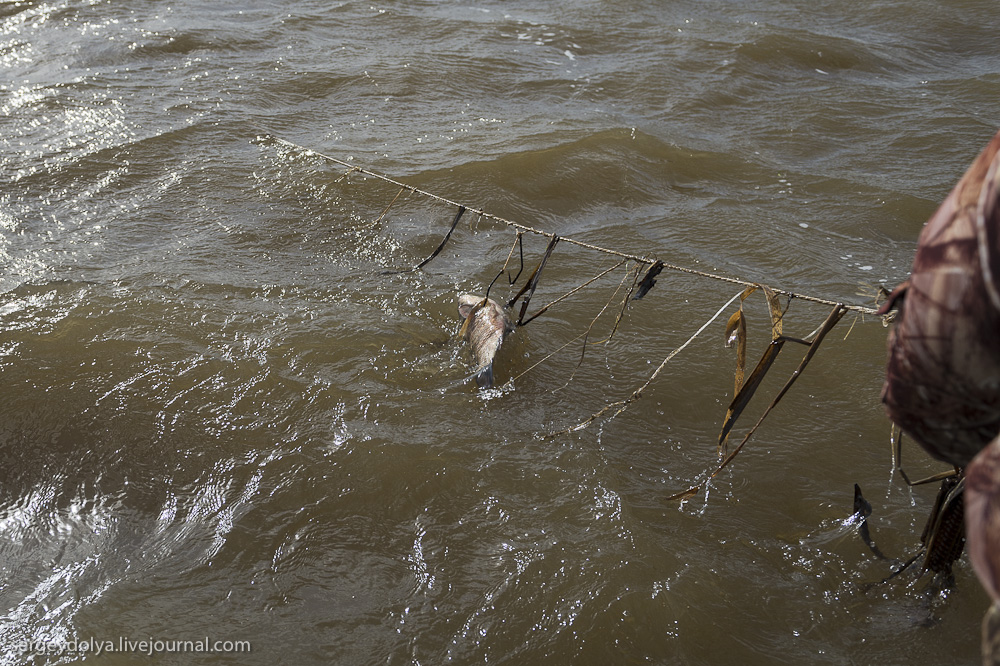 Then Vasiliy went to show me a net for carp fishing. A net is marked with a stick, and all the anabranch is blocked by it – all the fish that passes through the anabranch is caught into this net. 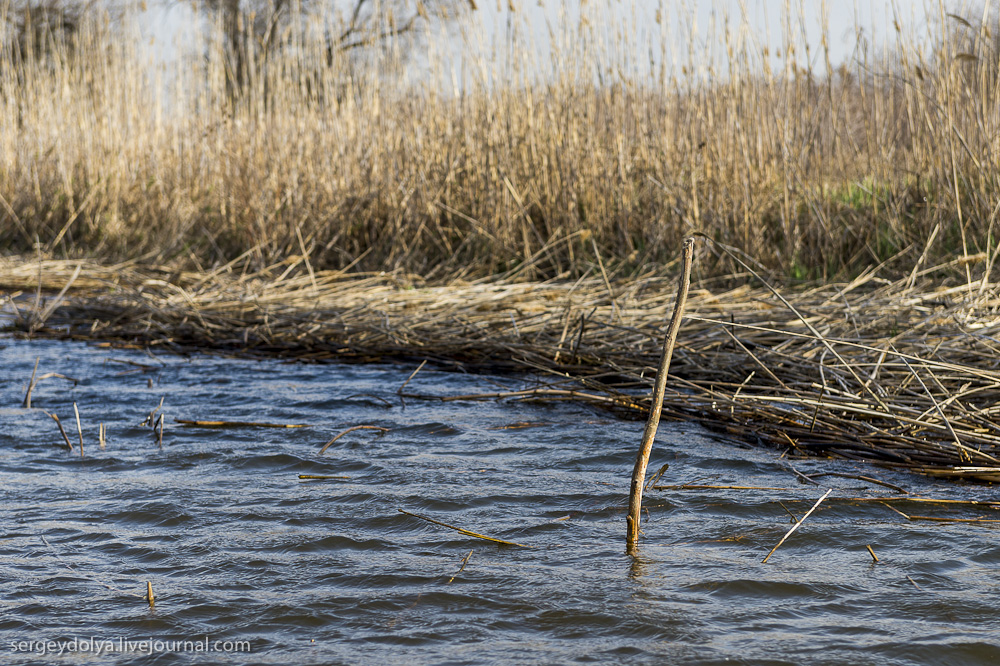 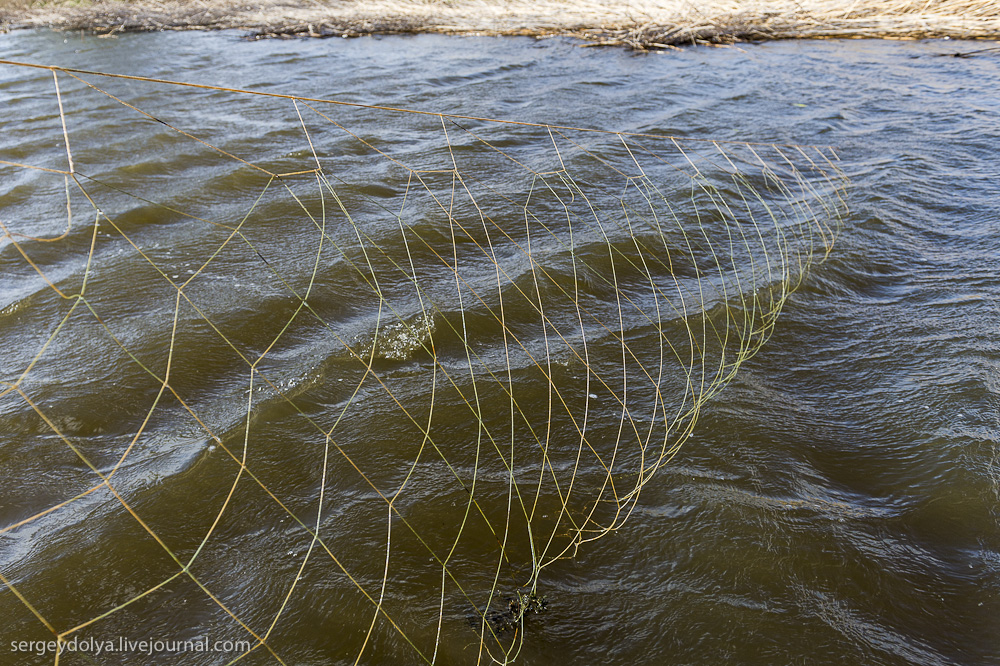 So, in addition to ‘home’ poaching, there is commercial – it is poaching that causes the greatest harm. It is conducted in the sea.

From the village to the avandelta, poachers go on a simple boat for about an hour, using a simple navigator. They leave the village in the evening, when it starts to get dark. Coming to the place, poachers change to a ‘baida’, and, having hidden their boat in reeds, they go out into the sea. From the last ‘kolka’ with reeds to the first marine hooked tackle is about 70 km. It takes 40 minutes to get there. They return home when it begins to grow light. On the sea, poachers go every other day, that is, 15 times a month if weather is good. If storm is on the sea, they can spend a night in the avandelta (in the afternoon) and then return home in a couple of days.

Unlike commercial (legal) fishermen, who work only during fishing seasons, poachers catch fish until the foaming of ice fields – from March to November. In the sea, Vasiliy has 12 tackles of 201-401 hooks; each of them is about 20-40 m in length. During a trip, an average of half a ton of fish is caught. You cannot see the bottom of poachers’ boat. They find a hooked tackle using a navigator. If a day is missed (for example, due to bad weather), the fish will die. The hooked tackle has to be raised; the spoiled catch is unhooked, and the tackle is put in the water again.

Having gotten the gear out of the water, the poachers dump all fish into the boat and start looking for caviar. According to Vasiily, there are two or three fishes with caviar in half a ton of sturgeon. They squeeze the caviar into a bag, and they throw out the sturgeon. Why? A heavy boat eats more fuel, and you cannot sell so much sturgeon to anyone. If there is caviar, this is enough to get benefit from the trip, as the cost of black caviar is 24 thousand rubles per kilogram, Russian sturgeon – 400 rubles per kilogram, and starry sturgeon – 350 rubles per kilogram. If from half a ton, you can get 6 kg of caviar, the revenue will be about 140 thousand rubles. On average, for a trip, poachers earn 170 thousand rubles: 150-140 thousand on caviar and 20-30 thousand on fish (approximately 50 kg – the rest of the fish are thrown away).

I to read more

At the beginning of May 2021, 170 dead Caspian seals were beached in Dagestan. Almost animals were young. And this