Russia remains the only state in the Caspian Region where the commercial hunting of seals is permitted. Who needs this bloody idiocy in the 21st century?

At the end of last week, early in the morning, I was awakened by a phone call. ‘Hello’, said at the other end of broadcast, ‘we are calling from Dagestan, we are here in the bathhouse, and we have a seal.’

I was called by Vladimir Mineev, a world champion, wrestler of MMA, whom I did not know exactly as he did not know me. We got acquainted on the Internet. More precisely, we did not even get acquainted – about who had called whom, I read later in the reports of news agencies.

After bathing near the coast, men went to have a plunge in the March Caspian, came across a seal pup, regretted and picked it up, brought it to a bath, and started to search on the Internet, who to call, found me, took photos of the seal on the background of their naked muscular bodies (I had asked for a photo of the animal at least roughly to determine its conditions; the seal had been weak). Being half-awakened, I promised to help them and perfectly coped with the task at another’s expense – called Svetlana Anokhina, a journalist, the only person I knew in Dagestan. I asked Sveta to negotiate with a veterinary clinic, drive to Sulak for picking the seal up and deliver it to a veterinarian, whom I would undertake to advise. The seal died on the table in the veterinary clinic, dragging the comic plot off to another world, and everything became lousy at once. The only thing the pup managed to do in its short life was to lie down on the knees of the world champion in wrestling and give an excuse to look into the details of the rapid disappearance of the whole species of marine animals that is happening right now, in these hours and minutes. 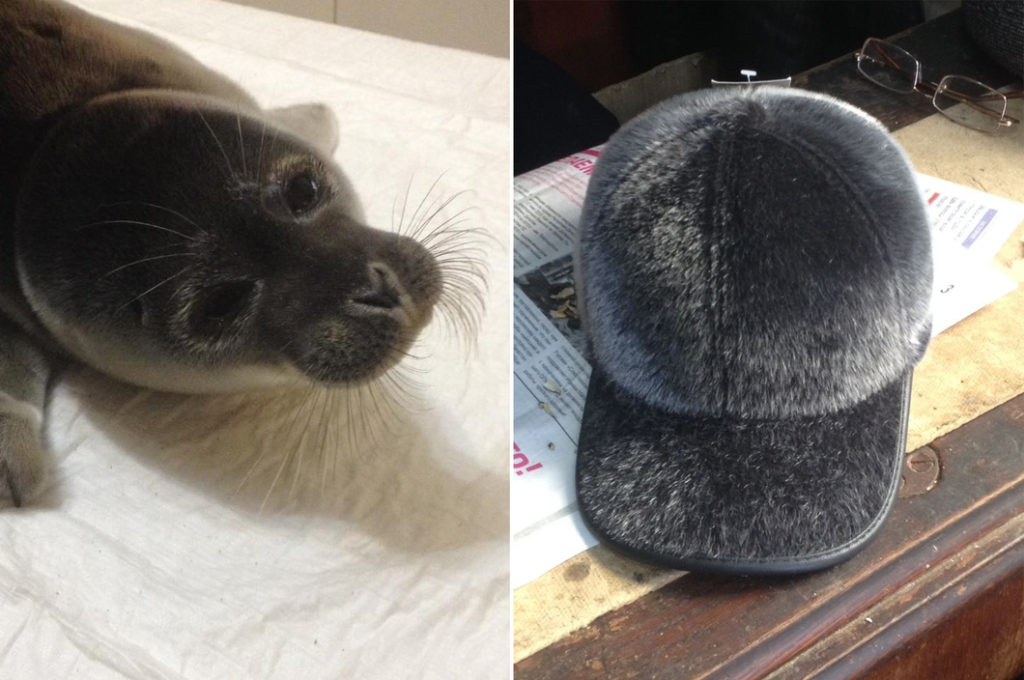 Seal fat is sold in the markets of Dagestan. In the central bazaar of Makhachkala, in the fish ranges, where the sturgeon and Caspian trout listed the Russian Red Book openly being sold, seal fat costs 400 rubles per 250 ml. They say that it helps against tuberculosis and rheumatism. Hats and caps made of seal fur are being sold in the workshops for the manufacture of hats. The price for the product is from 2.5 to 4 thousand rubles. From one seal alive, it is possible to sew three caps with the total cost of 10 thousand and to heat anti-tuberculosis fat up for 5 thousand additionally. The total: plus or minus 15 thousand rubles for a seal life – for all participants in this feast.

Hunters get about a quarter of this amount, the rest sum are given to buyers of carcasses, intermediaries, seal fat producers, hat masters, and sellers. How many seals is it necessary to kill so that this business would bring a significant benefit to all its participants – this is despite the fact that poachers receive their main and completely disparate income from sturgeon fishing? The account should go to thousands, but the market traders, all as one, say that the demand for seal hats has fallen, raw material for hats, making by hands, easily spoils, and what they have is delivered from other regions. The last statement does not seem to me too logical; in addition, there is information that the goods made from the fur of the disappearing Caspian seal are delivered from Dagestan to the Northern regions of Russia, where demand for them still holds.

Population of the Caspian seal is ruined by oil workers, dirty water and poisoned fish, the reduction of ice fields covered the Caspian – seals breed on ice – and seal hunting.

But, for example, there is no seal hunting in Iran; there the seal are given the status of “Endangered”, as it is in the Red List of the International Union for Conservation of Nature. Already almost 10 years in this country, there has been a non-governmental program for the preservation of seals – I am familiar with its curator Lenie ‘t Hart, who told me how they cleverly had invented to buy new nets instead of spoiled ones for fishermen. As soon as they had been guaranteed compensation, fishermen stopped killing animals endangered in nets, and began to cut them and release seals. Lenie complained that it was very difficult to find approaches to fishermen in Kazakhstan, where since 2006, the commercial hunting of seals has been nominally banned, but they have not given the status of a protected species. Since 1993, the Caspian seal has been included in the Red Book of the Republic of Azerbaijan with the status ‘EN’ (‘Endangered’); since 2011, it has been in the Red Book of Turkmenistan with the status ‘Category I (CR). The species is on the edge of extinction’.

Russia remains the only state in the Caspian basin that officially allows the hunting up to 6,000 Caspian seals annually. One of the most remarkable moments in this evil absurdity is that no one has reliable information about the population size. But even if it might have amounted to a million, it is still completely unclear, why it is necessary to continue this bloody idiocy in the 21st century. However, a million was 100 years ago, and now it has completely disappeared – according to various sources, the population is from 270 to 111 thousand individuals. And the figure of 270 is given by the Russian side, which has counted the seals in its sector of the Caspian Sea and extrapolated the data to the entire basin. The survey in 2012 was conducted by the Caspian Research Institute of Fisheries, which, taking into account the correction of the next three years, calculated the total allowable catch (TAC) for 2016 and 2017. ‘The value of the TAC was determined using a precautionary approach concept implemented in VNIRO methodological recommendations. The application of this methodology makes it possible to estimate the intensity of commercial hunting, calculate the share of commercial seizure, and avoid overhunting and undermining of the stock of aquatic biological resources in the Volga-Caspian fishery basin. Thus, the seizure of ABR within the framework of the TAC developed by FSBRI “KaspNIRKh” for 2017 will not damage the environment, including fish stocks and non-fish objects,’ is said in the recommendation report of the institute.

Other scientists are skeptical about this calculation, and about the optimism of KaspNIRKh regarding the growth of the population by 1 % in comparison with the previous survey, with which was not all flawless also. In the case of the Caspian seal, the method of extrapolation is not too correct. For a more accurate survey, it is required the simultaneous efforts of all the countries of the Caspian basin; but this is already an idealistic theory.

‘Nothing will save the Caspian seal, maximum 10 years left for it to exist,’ wrote to me Ilya Ermolin, a specialist in criminal economics of bioresources at Centre of Environmental Crime Studies (Copenhagen).

According to his data, only in Dagestan, without taking into account the water area adjacent to the Astrakhan Region, 10-12 thousand Caspian seals die in poaching nets annually. Some dead animals are simply lost along with the fishing nets (and then float up – literally), some seals are thrown by poachers into the sea because of their non-conformance; some of them are used, and alive seals being killed are also used in the business – to take fur and produce fat. Ilya Ermolin also believes that, except by-catch, seals are harvested quite purposefully, although, of course, without getting quotas.

‘Now the young people of coastal settlements in Dagestan often go 120-130 km from the shore only for seal hunting,’ says Ermolin. ‘They use the same gear as for sturgeon fishing, but sealing is safer – no border guards.’

The Dagestanis disagree with this statement. According to them, while there is sturgeon species in the Caspian Sea, it is not interesting for anyone to catch a seal – this is too resource-consuming to chase after it all day long. For four days of working ‘in the fields’, Svetlana Anokhina has interviewed a fairly large circle of people engaged in illegal fishing. As her interlocutors say (by the way, absolutely not hiding, that they poach sturgeon species with might and main), there are no seals even on Seal’s Island now, where they usually used to be in large numbers. This has been confirmed by Gadzhibek Dzhamirzoyev, the Deputy Director for Science at the Dagestansky Nature Reserve. ‘There is very little number of seals, nobody will look for them for deliberately catching,’ he said. Although the by-catch of seals – no one is going to argue with this in Dagestan – is always used. It is impossible for a seal caught by fishermen to escape from them, being alive. The fact is that it has been almost ceased to be caught.

As in the past year, no seal quotas out of 6 thousand will be used in Dagestan at all. There are two reasons for it: firstly, there is no sense in buying out what can be taken traditionally for free, and, secondly, there are no, simply, seals for hunting. It seems that the 10 years allocated by Ilya Ermolin to the Caspian seal is a too optimistic forecast.

Lora Beloivan is an artist, writer, the Founder and Director of the first rehabilitation center for seals in Russia, a member of the Marine Mammal Council. In the past, she was a correspondent in the Far East Branch of TASS, and RIA Novosti’s own correspondent in the Primorsky Kray.

One thought on “Once there lived seals, but were flayed”