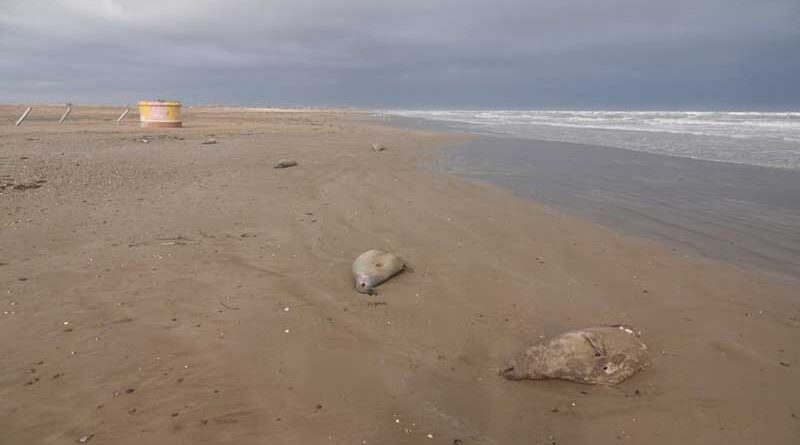 2020 finally threw another ecological DISASTER – THREE HUNDRED (!) dead Caspian seals were found on the coast of Dagestan. After extrapolation on the coast, where the stranding of dead seals was recorded, estimated mortality rate was at least 2000, and possibly more individuals.

The modern estimated number of the species in the Caspian Sea is less than 100 thousand. The International Union for Conservation of Nature gives a figure of 68 thousand individuals (IUCN Red List). In October-December of outgoing 2020, at least 3% of the total Caspian seal population died near the coast of Dagestan. This is a real disaster for the species rapidly increasing in numbers. We need to take immediate and, most importantly, effective measures to determine the cause of its death. We need to act!

I have carefully reviewed the information that was available. Obvious facts are the following: seals are in different stages of decomposition; different ages and sexes, including a large number of pregnant females with embryos; most animals are well fed; some seals are injured with fishing nets, but there are few such animals; the necropsy shows all the examined animals have died from asphyxiation. This is already interesting. Two brave women – Nataliya Shumeyko, an employee at IPEE RAS, Head of Kaspika Caspian Seals Conservation Agency, and Irina Suvorova, Senior Veterinarian at Moskvarium Center for Oceanography and Marine Biology – monitored the coast and performed autopsies on dead seals in the piercing December wind. They have taken biological samples, which are being analyzed in Moscow. The result will be known at the beginning of next year.

There are several versions of the death of Caspian seals: a) death from toxins and pollution; b) death from side effects during military exercises (they took place in November); c) animals were accidentally entangled in fishing gear and drowned; d) seals suffocated from the emission of gases during the increased seismic activity, which was observed in the Caspian Sea recently.

Based on everything that has been known and published in the open press, it is already possible to narrow down the options with great certainty and name the cause for the death of seals in Dagestan:

a) Death from toxins and pollution.
If the cause is in toxins, then not only the seals, but also other animals would die, if in pollution – the seals would be exhausted, and among them, for sure, there would not be so many healthy pregnant females. If version A cannot be excluded at all, it should be minimized.

b) Death from side effects during military exercises in the Caspian.
The military exercises took place in the Middle Caspian over a month ago. In this case, all the dead animals would be in approximately the same stage of decomposition, and signs of damage would be clearly visible on the body of seals or during necropsy. Based on the facts that are known, this version can be excluded now.

c) Death in fishing gear.
There were traces of fishing nets on seals. The press writes a lot, if not about the massive, then quite active, illegal fishing business in Dagestan and all other regions of the Caspian Sea. Traces of entanglement in fishing gear on the seals and necropsy confirm death from asphyxiation – the seals drowned. If the poaching was carried out during this autumn, then the animals died throughout this autumn. Therefore the seal bodies found were in different stages of decomposition. It can be said with confidence that animals of different sex and age, including well-fed individuals and pregnant females, die in illegal fishing tools. This is what all sources of information report about. But illegal fishing has been going on for several years and not only in Dagestan. Why then are there so many dead seals this year? And in this area? Something else has to be added to the illegal sealing in order to kill so many animals…

While looking through the available information about the Caspian seals and the events of this autumn in the Caspian, I came across a publication about the opening of the Caspian kilka commercial fishery by trawl vessels from Kaliningrad, which had not been conducted for more than 10 years. Moreover, the trawl fishery by Kaliningrad vessels is conducted in the area where dead seals are being found. Things are starting to get clearer. The reason for the mass death of the Caspian seal must be sought on trawl vessels.

Seals are accidentally captured by trawls and drown in them. Moreover, no external traces remain on seals. This is what all sources of information report. Observers on ships are likely to be absent. And fishermen, of course, will deny the seal by-catch. But asphyxiation identified in the examined animals and other indirect signs point to accidental by-catch and death in fishing gear. Therefore, it is useless to wait for the result of analysis of samples from dead seals. It will not help to clarify the cause of the disaster. Samples of healthy seals, including pregnant females, will not contain so many contaminants or pathogens that could quickly kill so many animals without any obvious traces.

But the Caucasus is a “delicate matter”, and I am afraid it will be problematic to discover and reveal facts of by-catch on trawl vessels. Moreover, now, when the migration of seals along the coast has already ended or almost ended, and most of the animals are already on the ice fields for their breeding. But control on ships need to be done. We need to look for the reason there. Now the stranding of dead seals may decrease, but next year it may happen again.

d) The version for the death of Caspian seals from seismic activity or asphyxiation from a large amount of harmful gases is so unlikely that I will not waste time discussing it.

Author: Vladimir N. Burkanov, Ph.D.  (Biological Sciences), Chairman of the Board at Marine Mammal Council, Senior Research Fellow at the Laboratory of Higher Vertebrates Ecology (Kamchatka Branch of the Pacific Institute of Geography FEB RAS), an employee at Marine Mammal Laboratory (NMFS, NOAA), a member of the International Union for Conservation of Nature Pinniped Specialist Group, a member of the Marine Mammal Council at the Interdepartmental Ichthyological Commission.

Photo by Nataliya R. Shumeyko: Dead seals on the Dagestan coast of the Caspian Sea, December 2020.