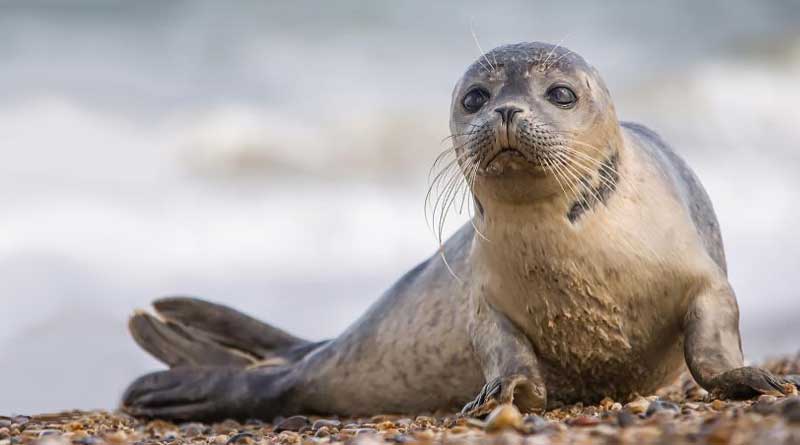 The only representative of marine mammals from the family Phocidae (true seals) inhabits the Caspian Sea – the Caspian seal. The Caspian seal occupies the top level in the trophic pyramid; there are no natural enemies for adult animals in the habitat. However, the abnormally warm winter of this year may adversely affect the Caspian seal population already sharply reduced in recent years. Gulsim Kazhmanovna Mutysheva, Ph.D. in Biology, Senior Environmental Advisor of NCOC N.V. has told the correspondent of Kazinform MIA the reason why warm weather can affect Caspian seals, as well as many other interesting facts about these animals.

– Gulsim Kazhmanovna, it is not entirely clear – why is the warm weather of this winter in our region bad for seals?

– The fact is that seals live in herds, keep one another and migrate seasonally across the Caspian in search of food. In winter, they whelp in the northern part of the Caspian, in ice accumulations. The Caspian seal lives up to 50 years, breeds once every 2-3 years. A baby (twins is a rare phenomenon) is usually called a pup. For the winter (the whelping period of the Caspian seal is from the middle of the last decade of January to the end of the first decade of February), the seal arranges a special “ice nest” for itself, from which a manhole leads to water. Seals construct such nests by scratching thin ice from the underside. Females whelp at a certain distance from each other. A newborn pup does not descend into the water and expects his hunting mother in a “nest”. Pups, like babies, are hungry every couple of hours. Being hungry, they begin to squeak. And if their mothers retired to hunt, they begin to look for food, crawling to other females. But females feed only their own pups, recognizing them by smell. By the smell, the mother also finds her crawling pup. Having returned to the ice floe, the mother-seal crawls along her pup’s track burying her nose in the ice. Baby-seals have a thick white fur that covers them only the first weeks of life, while they feed on milk. White-coated pups can be easy prey for predatory white-tailed eagles, wolves and jackals. The pups having white fur cannot swim – such fur immediately gets wet – and until molt, they can only rely on the protection of their mothers and their camouflage white color.

– Well, it turns out while the mother is foraging, her child will not freeze.

Maybe you are right, although the white fur of pups, for which they were massively exterminated before, quite normally protects them from the cold. But today, the thickness of ice in the Caspian Sea in places where seals give birth to their offspring is only 5-10 centimeters. This is very small. With its weight, an adult seal can break this ice and then the pup will be in the water. These cute animals weigh an average of 70 kg (50 to 100), reach a meter and a half in length and are able to dive to a depth of 80 meters in search of food. However, such a need rarely arises. Seals are predators; prey mainly on fish, rarely – on crustaceans. The main food is medium-sized fish – sprat, big-scale sand smelt, herring, Caspian roach, which the seal can consume up to 6 kg per day. The seal lives mainly in the water and hauls-out on the ground only for a rare rest and breeding offspring. And thin ice, as you know, is bad for such a large animal. Therefore, the current situation is fraught with the fact that weak puppies without the necessary blubber layer may accidentally be in the water. And it is quite natural that they can get sick. And since seals live in herds, the diseased seal will infect others. Babies are breastfed for a little over a month – fatty milk allows them to gain 2-3 kg per day! – and then they part with the mother and molt, replacing the white child’s cover with a smooth grey. So they need to be on ice for more than a month. But warm weather is dangerous for adult seals also.

-And what danger is there for them?

– In adult seals, subcutaneous fat, not fur, performs a heat-insulating role. After the period of feeding the pup, the seal molts. During the first molt, which lasts two to three weeks, the seal eats nothing, dispensing with the accumulated reserves of blubber. Having molted and dressed in a new skin, the seal can already hunt and live fully in the water. And with thin ice, as I said, an adult seal might fall into the water and also get sick and infect others, if not perish. So it turns out that some animals rejoice in a warm winter, but for seals this is very dangerous. Moreover, the population of Caspian seals has already declined catastrophically.

– And how many of them do we have? How often do they have offspring?

– For the first time, former pups give birth to their own pups in after 5-6 years of life. Currently, the number of seals is far from the maximum. If we compare the data with information a hundred years ago, the number of seals has decreased by 90%. Today their number is about one hundred thousand. Although the Caspian seal is considered to be an object of commercial hunting in Kazakhstan and Russia, no sealing has been carried out for the past two decades for economic reasons. The state of the sealing fleet, the cost of fuel and equipment, combined with high economic and personal risks, impede the organization of effective sealing. Although the sealing permitted by the Fisheries rules can be carried out in a pre-winter and winter periods, in winter – on ice. For over a hundred years, scientists in the Caspian have been studying and continue studying the status of the Caspian seal population, which is an important marker of the sea ecosystem state. The results of studying the forage base of seals show that after a decrease in the numbers of the anchovy sprat at the turn of the XX-XXI centuries, its abundance, like the abundance of the common sprat and other species from Clupeidae family, begins to recover significantly. Thus, along with the essential circumstance that the sealing presser on the population of the species has not existed for many years, relatively favorable feeding conditions also exist – since the fishing load on the populations of these feeding seal objects is also practically absent.

– Meanwhile, the media regularly alarm the environmentally concerned public with rumors  – either about the continued commercial hunting of these unique animals in gigantic quantities, or about the mass death of individuals of this species, or about the monstrous poaching in relation to the Caspian seal.

– As for the mass death of individuals of this species, alas, not many people are really deeply familiar with the literature on this issue. Meanwhile, with regard to the “mass death” of the Caspian seal near the Mangyshlak Peninsula almost every year in the spring, the full explanation for this was given more than half a century ago by an employee of the Caspian Research Institute of Fisheries (KaspNIRKh) Burgan Badamshin, who worked at the institute’s station in Bautino and devoted his life to studying of this species. He showed that in the pre-winter and winter periods there are cases of natural death of Caspian seals – due to malnutrition, diseases, the movement of ice fields under the influence of currents and winds, and the termination, as a result, of the seal’s access to atmospheric air, and frequent deaths of young animals. At low water temperatures, dead animals are well preserved and even freeze in ice. In the spring, the carries of dead seals are carried by currents to the coast of Mangyshlak – where people can see them, raising panic in this regard. The very stability of this phenomenon is a reflection of a stable situation with the population size. But the increase in population density on the shores of the Caspian Sea and the development of modern electronic media makes it easy an unverified, false event becomes property of the whole world. Alas, although the Caspian belongs to southern seas, the conditions in its northern part are very harsh in winter – ice forms here, hurricane winds of alternating direction blow, many-meters ice heaps plow its bottom, the temperature drops to minus thirty and lower – all this can kill adult seals, and of course, young seals.

– It turns out that severe frosts are bad, and heat is bad.

– Unfortunately, it is. Among the harmful factors contributing to the death of seals, in particular, is climate warming. To some extent, warm winters, when a sufficient amount of ice is not formed in the northern part of the sea, affect the population size. I repeat, in very warm winters, ice in the northern part of the Caspian Sea either does not set at all or melts early and seals have nowhere to bring their offspring. Therefore, they are forced to look for a place on polluted small islands, which does not benefit the pups at all. In the years with a warm winter, there are almost no newborn pups; seals accumulate on islands – and this leads to increased death: animals suffer from crowding, parasites, diseases, and adverse weather conditions.

– You have described everything very sadly.

– I am just trying to talk about all the risks that these amazing animals face. And what is the real situation, it will be known only this spring. And we hope that, in the current warm weather, using their centuries-old instincts, seals will be able to find places for comfortable feeding their pups, waiting for the molting period.

– Thanks for the interview!