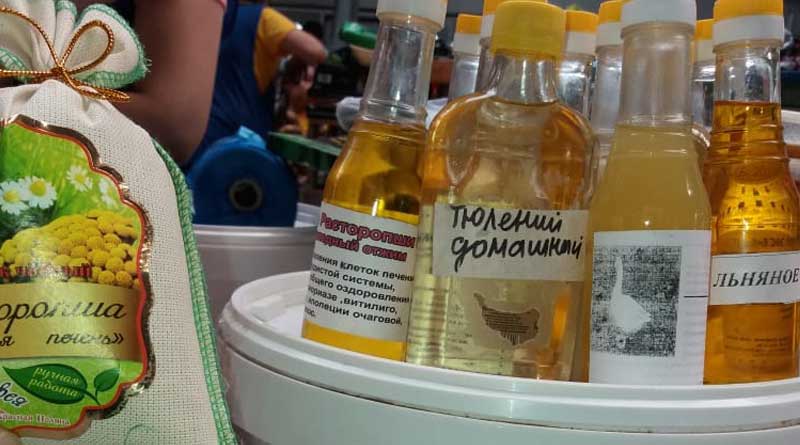 The decline in the population of the Caspian seal (Pusa caspica) since the beginning of the 20th century amounted to more than 90%. On the Red List of the International Union for Conservation of Nature, this species is recognized as Endangered. Since 2006, the sealing limit for the Caspian seal has not been approved in the Republic of Kazakhstan, therefore, sealing, producing and marketing products from this species are prohibited [1]. At the same time, study of the impact of fisheries on the seal population and the assessment of mortality as a result of this [2,3] shows that seals are often present in fishing areas and their by-catch in fishing nets is high.

In the autumn of 2015, the markets of Kazakhstani Caspian cities – Aktau and Atyrau – were monitored for the availability of products made from seals.

Data collection was carried out by the survey method. In Atyrau, the survey was conducted at 4 markets. 27 sellers were interviewed. 4 of them (14,82% of respondents) had factory-produced seal oil in containers of 250 ml, delivered from Barnaul and Novosibirsk (Russia), and these traders were not involved in the sale of local handcrafted seal oil; 15 respondents (55.56%) assured that they were not involved in the sale of seal oil and were not aware of its supplies to the markets of Atyrau. 5 sellers (18.52%) asked about the seal oil usage. 3 sellers (11.11%) replied that handcrafted seal oil could be purchased from some sellers of fish products with the onset of cold weather, from mid-October to March. At this time, the required amount of oil may be ordered, and there were people ready to go out on ice fields and get seals.

In the second half of November, one of the markets in Atyrau recorded the sale of handcrafted seal oil, presumably from the fat of the Caspian seal.

In Aktau, observations were made in two food markets. On the shelves there was factory-made seal oil in 250 ml bottles. Local handicraft products were absent. However, according to the respondents in the winter and spring, local handicraft melted seal fat is being sold in 5 L plastic containers. No other seal products were found in the markets of Kazakhstan’s Caspian cities.

Analysis of advertising sites on the Internet indicates the existence of the sale of handcrafted seal oil through ads that are periodically updated. One of the latest announcements, posted on May 10, 2019, offers to buy handcrafted oil in plastic bottles of 500 ml in Aktau.

Thus, the survey, the presence in the markets and the advertisements on the website for the sale of local handcrafted seal oil indicate the existence of illegal sealing of Caspian seals and demand for seal oil. This sealing seems to exist more like by-catch in fishing nets, but in rare cases, as deliberate catch upon individual requests. The extent of this catch is unknown. It is necessary to organize and conduct explanatory conversations with fishermen about the negative impact of hunting on the seal population, and strengthen monitoring of environmental agencies over the illegal sealing and circulation of products from the Caspian seal.

It is worth noting that, unfortunately, until now the Caspian seal in Kazakhstan belongs to fishing species, which does not exclude the possibility of resuming commercial hunting on this species and creates a consumer attitude to the species in the community. In view of this, it is recommended at the legislative level to moving the Caspian seal from the list of fishing species into the list of animal species that are not used for economic purposes, but have ecological, cultural and other value.

It is also necessary to legally recognize the fact of by-catch of Caspian seals in fishing gear. This will make it possible to put into practice the methods for recording by-catch of seals, their release from nets, to assess the injuries received by seals in nets, and also to develop measures to reduce the impact of fishing on the Caspian seal population and mortality as a result of this [1].

The work was carried out in accordance with an agreement with the Kazakh Research Institute of Fisheries LLP under the state order of the Ministry of Agriculture of the Republic of Kazakhstan for the study of population dynamics on rookeries in the Kazakhstan zone of the Caspian Sea and a comprehensive assessment of threats to the population of the Caspian seal.

References
1. T. Baimukanova How to preserve the Caspian seal (Pusa caspica)?//News of the NAS RK Institute of Plant Biology and Biotechnology. Biological and Medical Series 6 (324) Almaty. -November-December, 2017. – Pp. 100-111.
2. Dmitrieva L., Kondakov A., Oleynikov E., Kydyrmanov A., Karamendin K., Baimukanov M., Kasimbekiv E., Wilson S.,Goodman S. Assessment of Caspian Seal By-Catch in an Illegal Fishery Using an Interview-Based Approach. Available at plosone.org.  Accessed 2013 June 26.
3. T. Baimukanov. On the assessment of the impact of fisheries in the Kazakhstan sector of the Caspian Sea on Caspian seals (Pusa caspica) according to the results of surveys 2015-2016.// Collection of articles of the scientific and practical conference with international participation “Environmental Industrial and Energy Security 2017”. Sevastopol. – 2017. – Pp. 128-131.

Photo by M.T. Baimukanov, the Director of the Institute of Hydrobiology and Ecology (Irgely, Kazakhstan). A bottle of oil from the Caspian seal “Homemade”. A market in Aktau, Kazakhstan, May 21, 2020.