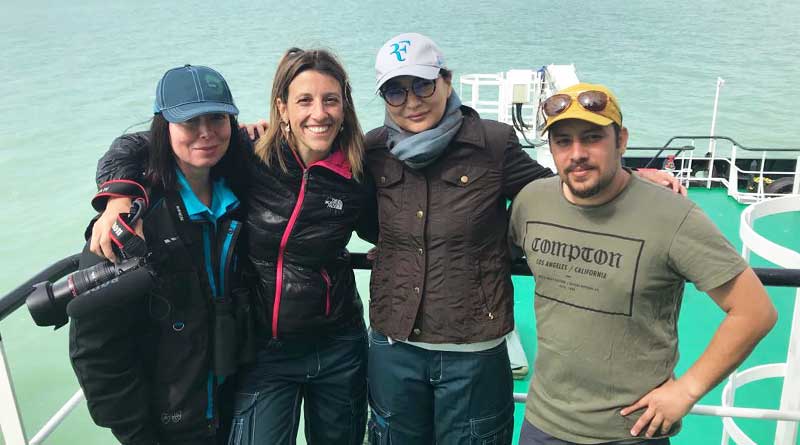 The film is about the International Caspian Expedition in 2018, made by Film Director and Director of Photography Sarah Del Ben (Lyon, France).

During the five expedition days, passing ship observations of the Northern Caspian were carried out along the route: the Port of Bautino (the Tyub-Karagan Bay), Kulaly Island, Novy Voctochny Island (New East Island), the Tub-Karagan Peninsula, Podgorny Island, Kalamkas, and the Port of Bautino.

The expedition explored the coast of Kulaly, Novy Vostochny, and Podgorny. There were no seals on the Tulenyi Islands Archipelago (the Seal’s Islands), were the most part of the Caspian seal population was used to hauling out in spring and autumn of the last century, and where the center of island commercial sealing was at that time. There were no animals and no hunters exterminating them there…

On Kulaly, about 10 people (meteorologists and border guards) currently live and work. Pyotr I. Lupenkov, the Head of the Kulaly Meteorological Station says seals have not formed  haul-out sites on Kulaly  since 2001.

Why do not Caspian seals return to these islands? There are several reasons for that, requiring further detailed research. Habitat degradation caused by sea level fluctuations is one of them. The water area adjacent to the island coasts is of shallow depth (fewer than 1 meter) at a distance of several hundred meters from the island coast. Seals haul-out on coasts, where there is a sharp slope of the sea bottom. The second probable reason is illegal fishing. Several seals, which were found on a kilometre’s distance in the north-eastern part of Kulaly Island, died in sturgeon net. And the third major reason is a general decline in the Caspian seal population abundance. There are no animals – there are no their haul-out sites.

The researches could not find any signs of seal rookeries on the Tyub-Karagan Peninsula (from the Cape Zhigylgan to Cape Bagardzhik).

Information received from fishermen, former seal hunters, as well as from port officials, representatives of the border service and other organizations, correlated with accumulated scientific data on the depressed status of the species and factors that caused a rapid decline in the Caspian seal population – over-fishing, mass mortality, and poaching.

The international expedition was carried out under the support Sabi Charitable Foundation.
The photo by Adylkhan Tovasarov, the General Director of CAIER (Almaty, Kazakhstan).