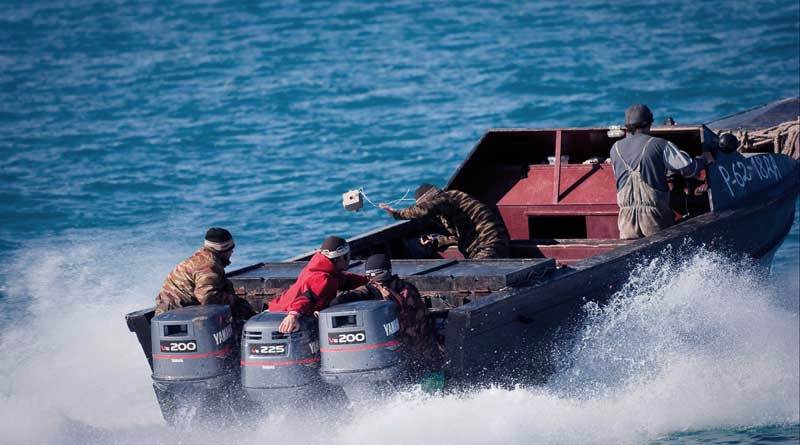 During the spawning of sturgeon in the Kazakhstan sector of the Caspian Sea, the border guard ships almost every day go on patrol. 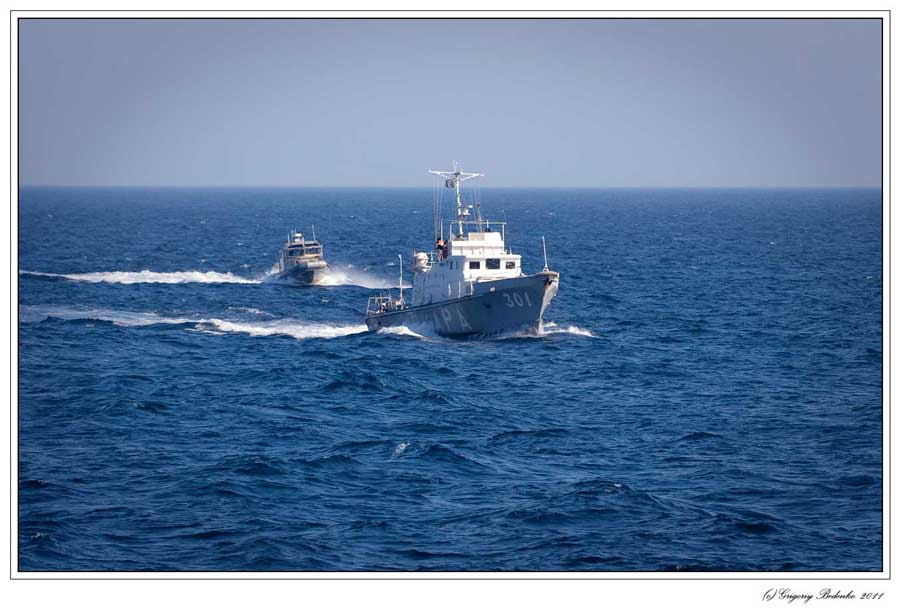 You can notice results of poaching activities everywhere. This time, the border guards are pulling fishing net out of the water, in which the Caspian seal has entangled and died. 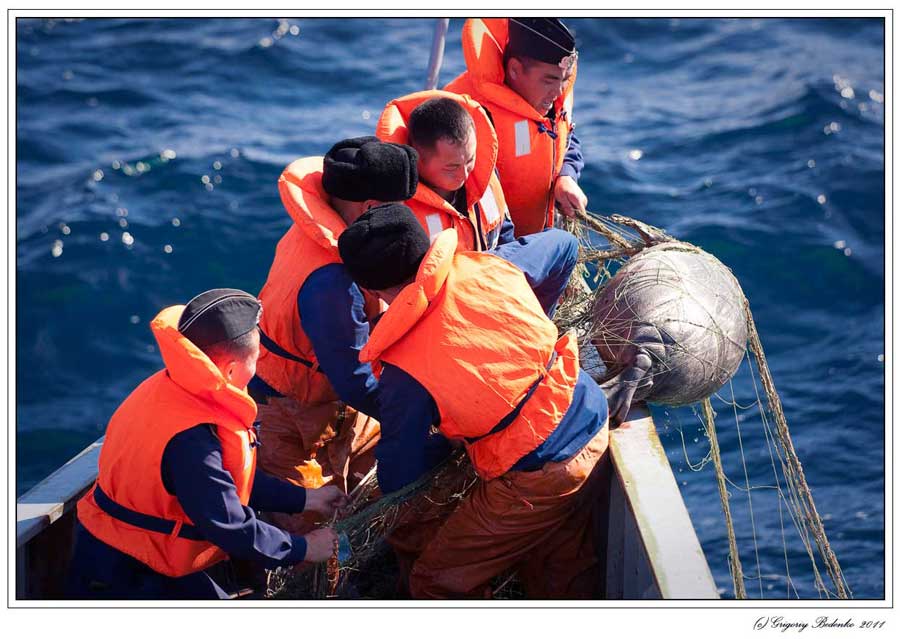 Here are the lovers of illegal fishing. The Azerbaijani seiner has gone to the territorial waters of Kazakhstan.  And now is barbarically fishing sturgeon with a special gear, so-called “colada”. Colada is a nylon rope of up to 2 kilometres in length. Hooks with bait are attached to this rope, and the whole structure is kept on the water surface due to floats – bundles of empty plastic bottles. A few sturgeons can be caught on such a gear at the same time. Poachers have GPS-navigators, so they know exactly where the coladas are set. 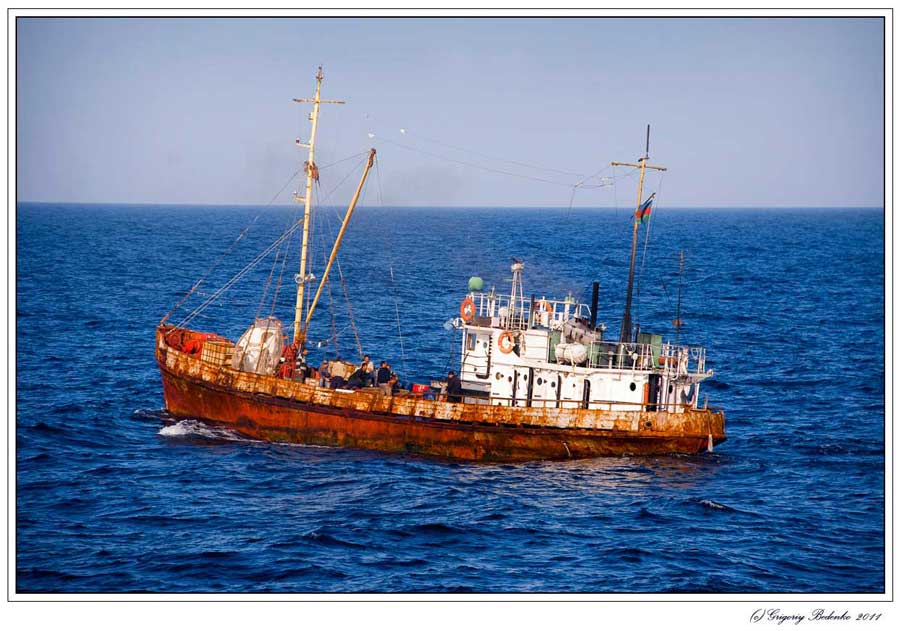 The tactic of poachers is as follows: they enter the Kazakhstan sector of the Caspian, set a colada and quickly leave this place. 3 days after, they come back, quickly taking their catch. However, this time they have been intercepted by border guards. In such cases, string of bursts from the machine gun is usually done. When a poaching vessel is intercepted, border guards board for inspection.

In the hold of the seiner, which we caught, there were gutted carcasses of sturgeon. Judging by their size, they were still quite young. The Caspian sturgeon is exterminated, not letting it grow. Curiously, there was no caviar on the ship. Border guards say that there is a real poaching cooperation in the Caspian. The Azerbaijanis catch sturgeon, gut it. Then on the radio, they call helpers (“dogs”) having high-speed boats, who buy sturgeon caviar. Being detained, the Azerbaijanis poachers usually say that they have lost their way.  They do not know that they are in the Kazakhstan waters, and that the fishing of sturgeon is prohibited here, and etc. Some of them complain about the Dagestanians, who have robbed them. And for this reason, they have lost their way, accidentally entering these waters…

The poachers detained by us pointed out the places where their coladas were set. We found a beluga caught with one of these coladas. 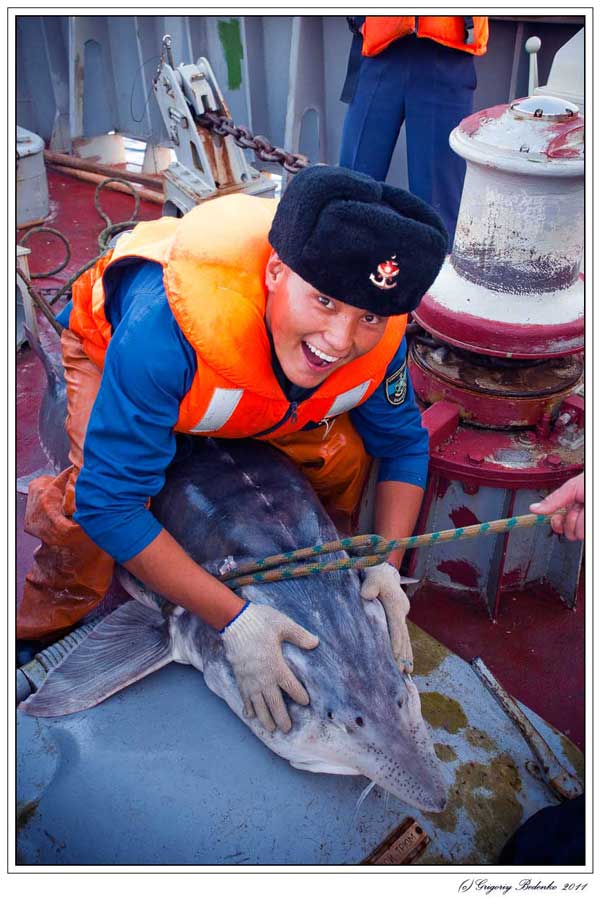 Unfortunately, the fish was already half dead, so it was used for dinner. As a rule, after the detention of poachers, all their equipment is confiscated. But in Aktau (Kazakhstan), a large Azerbaijani Diaspora is living. When an auction for the sale of poaching equipment is announced, the authorities of the Diaspora buy it out, and then return it to their brothers-poachers. And those poachers continue catching of sturgeon in Kazakhstan waters. It is interesting that many Azerbaijani poachers know our border guards by their names. And some of them have been detained for many times…