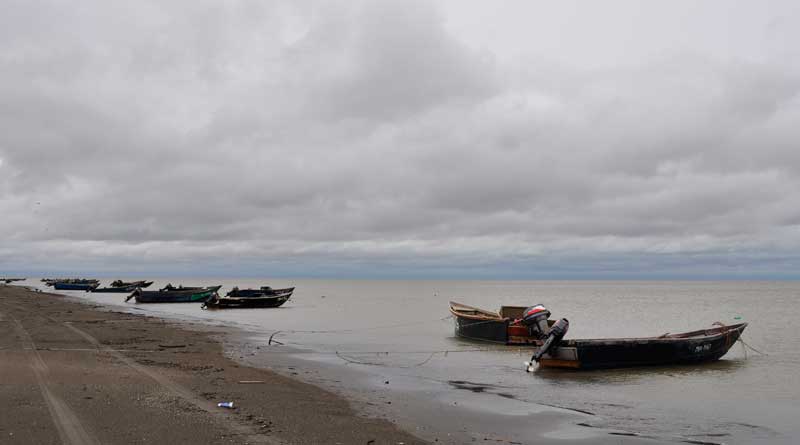 The Caspian Octopus is a documentary film shown recently on the First Channel in Russia. It was filmed several years ago, but the situation has changed little since then, rather become worse. This film is about the Caspian mafia (there was Italian famous TV series, known as “La Piovra” or “The Octopus”): black caviar and the same black money, poachers, corruption, blood… Of course, nobody says a word about the Caspian seal. It would seem, why should the animal mentioned here, in general?.. But this is only at first glance. Those, who earn on caviar, do not need any interference. And superfluous witnesses are also not needed, as well as any other stuff that draws attention to the sea. Including the Russian Red Book animal – it is always scientists, volunteers, areas, the public, and other pesky noises. The crime does not need witnesses. And what is happening to the Caspian today is a crime. The sea is tightened with fishing nets – the Caspian is literally filtered, ruthlessly squeezing everything that can be turned into money. This cannot be seen from the coast. And, as it were, it does not exist. Until seals entangle in these fishing nets. As long as their corpses injured by hooks and fishing nets are thrown ashore. Now such photos are not being shared on the Internet around the world. The Caspian seal disturbs everyone. From the bottom, where unemployment turns honest workers into poachers, to the top – such a “business” cannot exist without high patrons, because it attracts public attention. Watch this film. Well, to understand why our Caspian seal has been deleted from the list of animals for inscribing into the Red Data Book of Russia…

Half a ton of black caviar is illegally delivered into Moscow every day. The valuable product from the Volga River and the Caspian Sea is transported by trusted couriers: conductors in trains, stewardesses and truck drivers. Having delivered to secret apartments, it is carried to the capital’s markets and restaurants. A kilogram of contraband caviar costs 60 thousand rubles (about 1,000 USD). Astrakhan, Kalmyk and Dagestan mafia caviar clans have made huge fortunes, despite the Border Service of FSS Russia struggling. Who exterminates sturgeon? Why is the sea border still troubled?

Every year black caviar becomes less and less on sale: poaching groups almost exterminated all sturgeon in the Caspian. Nowadays you cannot catch the Russian sturgeon, beluga, and starry sturgeon. In the 1990s, using multi-kilometer fishing nets, criminals virtually exterminated the most ancient species of fish. “Barons” of caviar mafia and “patrons” of law enforcement agencies made million-dollar wealth. The Border Service of Russian Federal Security Service (the Border Service of FSS Russia) tried to protect the remaining biological resources in the Caspian, striking a powerful blow at Astrakhan, Kalmyk and Dagestan mafia clans. The poaching fleet suffered serious losses.

Who exterminates sturgeon? Why is the sea border still troubled? I am conducting a journalistic investigation with Andrei Skrabot.

Criminal clans daily bring to Moscow half a ton of black caviar. This delicacy is delivered by rail, road and air. The valuable product is hidden in caches. Only trusted couriers (conductors in trains, stewardesses and truck drivers) work for criminals. Trains, planes and trucks from the Caspian Region are rarely inspected – the police, as a rule, do not stop smugglers. Black caviar is quickly delivered to the capital’s restaurants, secret apartments and markets. For example, on the Danilov market, the most counters are full of sturgeon. And if you ask a knowledgeable seller whether there is black caviar, most likely, you will be offered to buy it.

To date, a kilogram of the smuggled delicacy costs 60 thousand rubles (this is about 1 thousand dollars). Astrakhan caviar is an absolute favorite. It is believed to be impeccable both in taste and other characteristics. It is for this reason that most criminal dealers present any caviar as the best Astrakhan product, although it is brought to Moscow from Azerbaijan, Dagestan, Kazakhstan and even from the banks of the Amur River. By the way, the capital criminals consider the transportation caviar from Kazakhstan to be the most simple and safe way.

So what criminal clans are still making raids in the Caspian Region, exterminating bioresources? How are Russian border guards fighting poachers?

Until the beginning of the 1990s, two states, the USSR and Iran, were fishing sturgeon in the Caspian. Moreover, the USSR was in the first place in terms of sturgeon stocks, fishing and black caviar production. In the 1980s, Soviet enterprises produced up to 2.5 thousand tons of black caviar a year, Iranian – 250 tons. After the dissolution of the Soviet Union, a single fish protection system collapsed, and a catastrophic decline in sturgeon abundance began. Illegal fishing reached an industrial scale. Poachers united in large groups with a clear division of labor, established channels for the sale of goods inside and outside the country. Of course, there was fight against poachers. In 1994, on the Lower Volga and the Caspian Sea, during the spawning period, an operation was conducted with the participation of special forces sent from other regions. The security officials were endowed with broad powers, including the right to use weapons in the case of resistance by criminals. But all this created only the appearance of struggle. In the so-called “sturgeon areas”, all people were involved in sturgeon illegal fishing: fishermen, the local administration, and law enforcement agencies.

The poor technical equipment of the fish inspection and miserable salary of the militiamen in the 1990s did not allow opposing the powerful mafia structures. Organs of law and order detained and punished single-handed poachers or those who did not pay their due bribes in time. The high-profile criminal case of Renato Salikhov is still remembered in the region. The former Head of the Department for Combating Organised Crime in the Astrakhan Region, who was sentenced to life imprisonment. The colonel of militia was involved in large caviar fraud. He, as the investigation alleged, was the curator of the two most powerful at that time criminal organizations of the Astrakhan Region – Russian Club and Tatar Trade Union. Bandits openly engaged in illegal sturgeon business: they sold sturgeon and black caviar. No one could go to sea without the unofficial permission of these organizations and, accordingly, without Salikhov’s approval.

At the main channel of the Volga River, several poaching brigades operated at once, and all of them were under the patronage of one or another power agency. Fish were exterminated by prosecutorial and militia poachers, and groupings which were under the control of local officials and fish inspection. The merging of criminals and power suited everyone.

Today the situation in the Caspian has changed. To be professionally engaged in poaching has become simply unprofitable. The cost of a boat with powerful Japanese engines (so-called “bayda”) reaches 2 million rubles. You need money to pay for hundreds of liters of fuel. Poachers’ equipment (multi-kilometer fishing nets and navigation equipment) is also very expensive. And all this wealth might be lost if you meet with representatives of the Border Service in the open sea, who have not been trespassing with violators for several years. As a rule, after the chase, poachers are detained and brought to court, and then their boats are seized.

Despite the daily work of border guards and the operations conducted by them, poachers in the Caspian Sea still exist. The reason for this is primarily the high level of unemployment. With the disintegration of the USSR, fishing has become almost the only source of income for residents of coastal areas.

“Each poaching motor boat (‘bayda’) must bring at least 500 kg of fish to justify the costs of going to sea. But these boats return with 1-1.5 tons of fish. Due to the fact that sturgeon has been practically exterminated by trawls near the Dagestan coast in recent years, now it is mainly concentrated just off the coast of Kazakhstan,’ says Sergey Rudoy.

At the Border Service of FSS Russia in the Republic of Kalmykia and Astrakhan Oblast, we were told about the results of special operations conducted on the Volga and the Caspian Sea. In 2010, the border guards detained 4 commercial transport vessels and 136 small-sized motor boats (‘bayda’), seized 482 km of fishing net, 20 tons of sturgeon, 15.5 kg of black caviar, 19 poaching camps were destroyed, 1.5 thousand live sturgeons were released into the sea, 453 criminal cases were initiated, and 20 people were brought to criminal liability. As noted in the Border Service, the majority of poachers are residents of Dagestan. Residents of neighboring countries often become violators also. For example, poachers from Azerbaijan are often found in Russian territorial waters.

2 thoughts on “The Caspian Octopus”