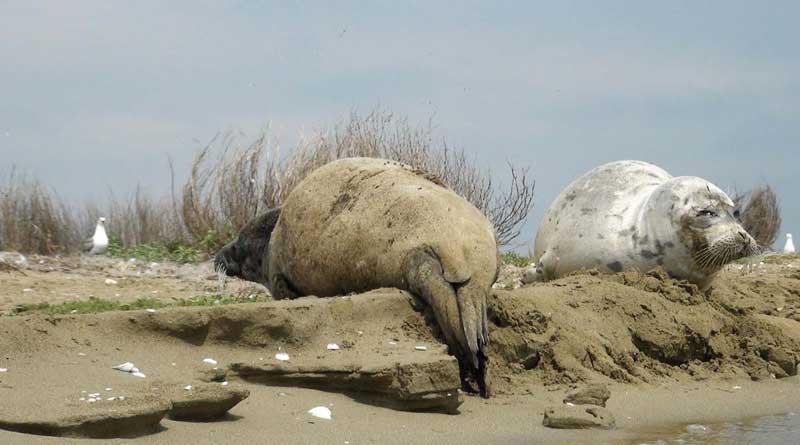 For over two years, the Institute of Hydrobiology and Ecology (Kazakhstan) has been filming a documentary about Caspian seals. Commercial hunting, unknown data, figures, international researches, and the current status – the great work has been done with great love and academic thoroughness. 2 parts have been created and presented at several events, and the third is in their plans. The off-screen text of both parts is in Russian. Now you can read the off-screen text written by Mirgaliy T. Baimukanov, PhD, the Director of the institute, for the first part of this documentary Commercial Hunting and Researches.

In 2008, the Caspian seal was listed by the International Union for Conservation of Nature with an alarming status Endangered. What has brought the Caspian seal to this verge of extinction? First of all, it is commercial hunting – IUCN gives an explanation.

This species was a valuable commercial object from time immemorial. The Caspian seal forms large winter haul out sites on ice of the Northern Caspian during the breeding season, as well as spring and autumn haul outs on islands and sandy spits while it moults and migrates to reproduction sites. And it was these biological features that made the Caspian seal an easy prey in the northern part of the Caspian Sea almost all the year round, except the summer months. Therefore, we will focus on the history of commercial hunting on the Caspian seal in this part of the sea.

The commercial seal hunting became active in the middle of the 18th century. In those days, it was conducted in spring and autumn, mainly, in the mouths of the Volga and Urals Rivers and on the Tyuleny Islands (the Seals’ Islands). In autumn, being armed with short clubs, sealers sailed to seal haul out sites, using special boats (so-called “budarki”). Having crept up to sleeping animals, they used to kill hundreds or even thousands of seals per night. In the morning, killed animals were transported to large sailing vessels (so-called “kusovye” boats) of carrying capacity up to 40 tons, where killed animals were flayed.

Slaughter in spring at rookeries was similar to autumn sealing on islands, but did not require great care from sealers, since moulting seals were weakened, and, even being frightened, they returned soon again to the coast. Sealing on islands significantly reduced the number of the Caspian seal population in the second half of the 19th century.

From the beginning of ice breaking to mid-March, people hunted among drifting ice, using “kusovye” boats. There was also a winter slaughter on ice – sled sealing. Using horses and dogs, hunters killed both adult seals and newborn pups having snow-white fur, which was highly valued. Such sealing was carried out in spites of being very dangerous for people – an ice field was often broken, and ice floes with sealers carried away into the sea. From 1865, sled sealing was banned, but despite this, it was carried out, as it was beneficial to the poor.

In the shallow waterways of the Volga and Ural Rivers, seals were driven into the fishing nets by hunters on boats. Being surrounded by fishing nets and boats, the seals were killed with special hooks.

Seals were killed in large quantities for their fat and fur, but meat was not consumed. The local people used the seal’s bile as a remedy for fever.

The decrease in the number of Caspian seals was mentioned by D. Livkin, a captain of the Ural Cossack army in his report ‘on the Seals’ Islands, where seals used to be in huge numbers, there was much less number of these animals.’

With the formation of the village of Nikolaevskiy (now the village of Bautino) in the 1960s, a winter ship sealing was organised, which became main in subsequent years. During the seal slaughter by ship, mostly female seals were killed.

From 1867 to 1915, average seal slaughter was 115 thousand individuals. During the First World War and Civil War (1917-1922) and until the end of the 1920s, commercial seal hunting was banned, and there is no reliable information on its quantity.

In the 1930s, there was a significant increase in commercial seal hunting due to the removal of all restrictions, and the record number of 228 thousand Caspian seals was killed in 1935. Being carrying out in the following years, aerial surveys recorded a reduction in the number of pup haul outs and seals. The volume of sealing was steadily declining despite conservation measures, efforts to improve commercial hunting and the use of more sophisticated vessels: the average slaughter in the 1950s was about 50,000 seals. From 1966, for the development of fur-sealing, mainly pups – newborn and moulted ones (so-called ‘sivars’) – were killed without any restriction.

But in 1970, they had to introduce a limit of 70,000 newborn and moulted pups per year, which gradually declined, reaching 45,000 pups in 7 years. But this volume was not mastered every year also.

It is generally believed that the total number of the Caspian seal was about 1 million individuals at the beginning of the 20th century, but already in the first half of the 1980s the population number decreased to 450,000.

The funds spent on search for already sparse and few pup haul outs on ice and organisation of sealing and processing of killed seals were no longer justified themselves, and the commercial hunting on Caspian seals fell into decay.

A sharp deterioration in the Caspian seal population state occurred between 1997 and 2001, when mass mortality was recorded. The largest mortality was observed in 2000: about 30,000 dead seals were found on the coasts of Azerbaijan, Kazakhstan, Russia, and Turkmenistan. More than 10 thousand of them were on the Kazakhstan coast. Studies showed that the cause for the death of seals was a new strain of the canine distemper virus.

Each year from 2005 to 2012, in the Northern Caspian, on ice fields, an international team? including scientists from Sweden, Estonia, the Great Britain, Russia and Kazakhstan, carried out aerial surveys of Caspian seals. A period was chosen when all the pups were already born – on February 15-25. The assessment showed that the population size has decreased to 100 thousand individuals. In Kazakhstan, the limit on sealing was cancelled in 2006, and commercial hunting on the Caspian seal became impossible.

The international team of specialists conducted helicopter overflights in the north-eastern part of the Caspian Sea from 2008 to 2011. The Caspian seal moulting haul outs and migratory routes to breeding sites were identified.

Among surveyed areas, groups of high concentrations of seals were found on the Islands of Durnev in the Komsomolets Bay, where the number of moulting seals was up to 20-30 thousand individuals. In the autumn of 2009, about 700 seals were recorded on an island near the tip of the Kendirli Spit (the Kendirli Bay).

For a few years, satellite tagging of seals has been conducted. It has been confirmed: after breeding on ice in the Northern Caspian, seals migrate to the middle and southern part of the sea. But the Northern Caspian has been turned out to be important for seals as a foraging place. And a certain number of them remains permanently there.

Since 2015, the Government of Kazakhstan has been funding research on the Caspian seal in order to preserve it. A lot of new scientific data on the population distribution, its habitat conditions has been obtained, and threats to the Caspian seal have been identified. The monitoring of places, where seals concentrates (on the Durneva Islands in the Komsomolets Bay and in the Kendirli Bay), has been carried out. The researchers pay special attention to the haul out sites of the Caspian seal in the Kandirli Bay.

There is a sandy spit in the eastern part of the Kazakh Bay. Connected in the southeast with the mainland, the Kendirly Spit forms the eponymous bay. In the north-western extremity, the spit has a small shallow bay with a small islet. It was on this island that seals sleep and rest. In this bay is always calm, even in a strong sea storm. There is also food for seals (shrimps, molluscs, crayfish, and goby) there. The nature arranged for the Caspian seal a natural reserve there.

Decrease in the number of the Caspian seal at the rookery in the Kendirli Bay is due to a constant factor of disturbance. Every day people get here to hunt on birds, they shoot seals also. Fishing nets are set too. Having sailed on boats, people go to the coast and drive seals into the water. On the spit and on island, there is a lot of shooting cartridges, dead birds, and abandoned fishing net of monofilament.

Located in the middle of the Kendirli Spit, the constructing tourist base is a new factor of disturbance for seals. If we do not protect the rookery and adjacent waters from tourists, it will disappear in the near future.

The Institute of Hydrobiology and Ecology, Kazakhstan