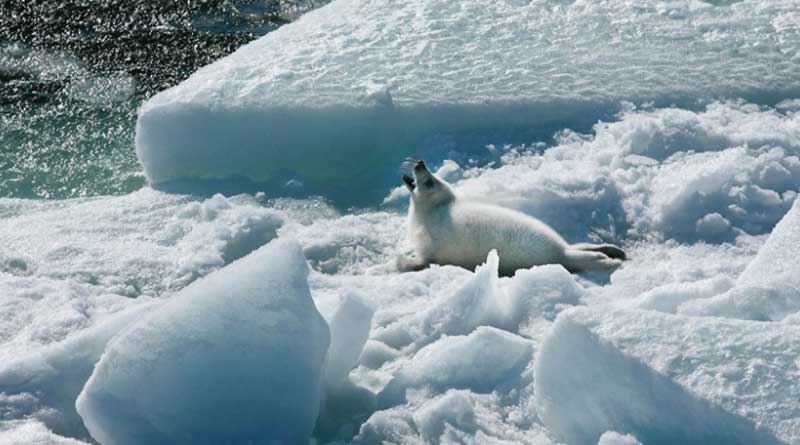 Hypoxia and decreases of the food supply have been repeatedly associated with changes in river runoff, ice cover, anthropogenic pollution and other environmental factors, however, no stable connections have been detected. One of the reasons for large repeated death of benthos and fish is expected ejection of fluids from the Earth, primarily methane, due to the activation of seismic. The degassing methane, even when its concentration is less than 1 mg/l, kills benthic organisms. Bacterial oxidation of methane leads to hypoxia and death. The notable reduction of seals abundance happened in 5-7 years after the intensive degassing of methane on the wintering grounds of seals (in the Northern Caspian and White Sea) as there was a decrease of food supply during the whelping and feeding season, since the degassing accompanied death of benthos.

Hypoxia, sharp decreases in the biomass of macrobenthos and fish death were repeatedly attempted to relate to changes in river runoff, ice cover or anthropogenic pollution, but the connections were not unambiguous, large-scale and long-lasting. The comparison of these phenomena, negative for organisms, with the activation of regional earthquakes gives possibility to find relations between them. The formal basis for this is that most hydrobionts, due to the rarity of earthquakes, are not adapted to lithospheric fluids and the presence of methane even at concentrations below 1 mg/l causes the death of juvenile fish [1]. Habitation of hydrobionts in the areas of the earth’s crust fault leads to their functional disorders and even death. For example, the biomass and number of bivalve mollusks in the Kandalaksha fault of the White Sea is 2 ÷ 3 times lower than in other parts of area [2].

The decrease of zoobenthos biomass in traditional feeding areas is reflected on benthivorous fish as their fatness depends on the status of their food base, with a decrease in which, the fish are forced to seek food elsewhere. To compare the changes in the fatness of benthivorous fishes and seismic stresses, spawning sturgeons were chosen. They have not a swimming bladder, so they are resistant to seismoacoustic influences, and spending part of their life in fresh water, with a content of natural gases during spring floods, are resistant to methane [1]. Seals are also resistant to the gas composition of water, as they breathe atmospheric air. However, 5-7 years after the earthquakes that occurred in the wintering grounds of seals, their numbers and production decrease, which can be explained by a sharp decrease in the food base during the period of whelping and feeding.

Anomalously high methane concentrations (1÷11 mg / kg) are observed in the sediments of the Northern and Middle Caspian that caused the decreases of benthos biomass. Local maxima of oxygen deficiency areas confined to the Terek coast, in 1964, 1966, 1969, 1973 and 1981 were associated with spring-summer earthquakes (Fig. 1) [3]. 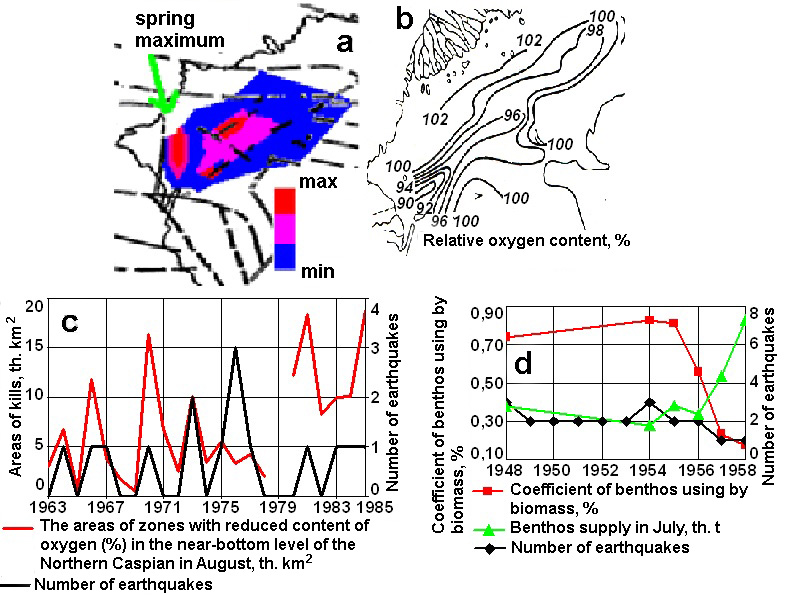 Fig. 1. Methane content in sediments of the Volga seashore (a); the average long-term (1961-1983) distribution of the  elative oxygen content in June-July, % (b); comparison of the biomass of Mytilaster in the western part of the sea, the number of Terek earthquakes and the area of the sea with a reduced oxygen content in August (c); coefficient of benthos using in the Northern Caspian, the benthos supply in July, the number of earthquakes (d).

In the years of sharp decreases of benthos biomass, food relations between benthivorous fishes exacerbated, competition for food increases that immediately leads to decrease in the rate of growth, and a higher impact of grazing pressure on benthos. So, for example, in the mid of 50 years almost all the forage benthos was consumed by benthivorous fishes (Fig. 1, c). In the years of seismic stress on benthos (1954, 1956), in stomachs of sturgeons and roach (vobla) was to 15-20 % of plants and sediments, whereas in seismic calm years 2-3 times less. Only in 1957-1958 the load decreased, and this happened because of the weakening of seismic stresses on the benthos and not by reducing of benthivorous fishes. Comparing benthos biomass changes (taking into account its benthivorous fishes grazing) with the number of earthquakes in the region, it turned out that biomass growth coincided with a decrease in seismic activity in the region [3].

“In 1988 there was a catastrophic decrease in the biomass of the bottom fauna in the deep-water part of the Northern Caspian. In these vast areas survived 1.5-2 % of the total number of bottom animals in previous and subsequent years. A similar decrease was in 1938 with sea level decline. A sharp decrease of benthos cannot be explained by the intensive grazing by fish, as during this period the deep-water area was not a feeding pasture of sturgeon that eat mollusks. This is probably due to stable kills phenomena. According to the laboratory of water problems of KaspNIRKh, the saturation of water with oxygen at the bottom was reduced to 9 %. The area of hypoxia in June was 1.5 times higher than in the same period of the previous year. In 1989, the hydrological situation improved, the area of hypoxia decreased to 4.5 km2 and in benthos begins to the growth of biomass in all groups of invertebrates almost to the level of previous years” [4, p. 104]. The main concentrations of sturgeon in 1988 were in the Southern Caspian. In 1989 the area of sturgeon grazing increased to 28.0 thousand km2, compared to 19.3 thousand km2 in 1988, and the number of sturgeon in the Northern Caspian in 1989 nearly doubled [4].

A sharp decrease in the benthos biomass and unusual behaviour of sturgeon in 1988 coincides with the activation of earthquakes in the zones of the Dagestan and North Caspian faults (Fig. 2). There is no uniform response in the development of benthos to these earthquakes in brackish and fresh waters (Fig. 2a) [4]. This is due to both the marine location of the active faults and influence of ice phenomena, river flow, sediment, accretions and surges on the shallow-water benthos. Only at depths more than 10 m, where the water salinity exceeds 4-6 ppm, the increase in seismic activity is accompanied by a sharp decrease in the biomass of benthos – mollusks, crustaceans, and worms (Fig. 2 b).

Fig. 2. Comparison of the number of Terek earthquakes with the biomass of mollusks, nereis and crustaceans at depths from 3 to 6 m (a) and over 10 m (b).

The life activity of Caspian seals (Pusa caspica) in great part depends on seismic activity (Fig. 3). After 5-7 years of the increase in the number of earthquakes, the commercial hunting on seals falls. This can be explained by the influence of a decrease in the food base – crabs, mysids and gobies, actively consumed by seals during the winter when the whelping and feeding take place [3]. As a result, after 5-7 years, a small generation appears. As discussed above, after the seismic stress for the benthos in 1988 5-6 years late, in 1994 the seal commercial hunting fell more than twice as compared with 1988-1993. 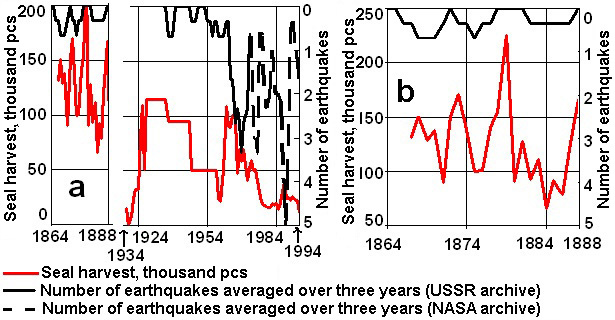 Fig. 3. Comparison of sealing in the Caspian and number of averaged over three years earthquakes shifted by 5 years in the North Caspian region (a); an enlarged fragment of Fig. a (b).

The catches (reproduction) of navaga (Eleginus nawaga) in the White Sea are limited by seismic activity (Fig. 4). After 1-2 year of earthquakes increase its catches have local minima. In the seismic calm years 70-100 % of fish are ready to spawn at two-year age and in seismoactive years its number reduced to 30%. The sharp decline in the number of navaga, which is food for harp seals (Pagophilus groenlaudica) during the period of whelping, feeding and juveniles feeding, as well as in the Caspian Sea in 6-8 years, leads to the decrease in sealing [5]. 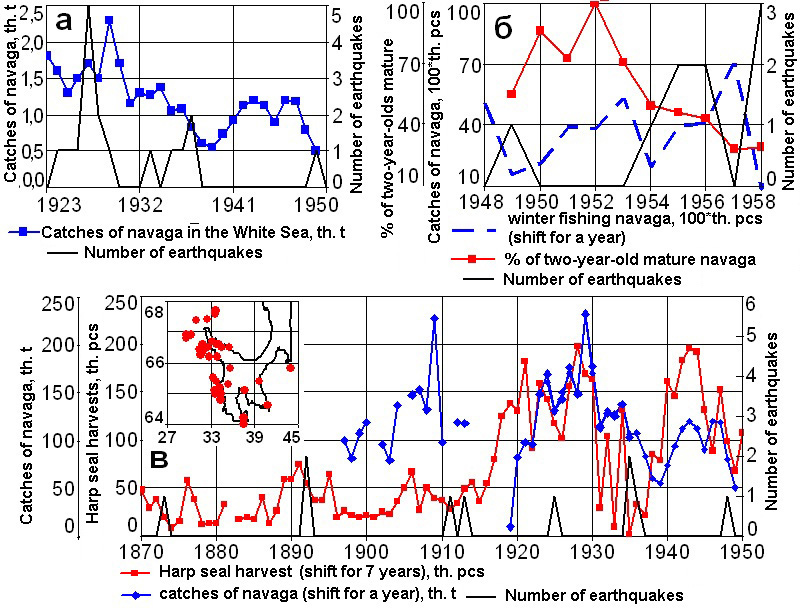 Fig. 4. Comparison of the number of earthquakes with catches of navaga, % of two year-old mature navaga and fisheries of the harp seal (with the epicenters of earthquakes in the White Sea).

This material shows that when earthquakes are activated, benthos became in depression, the fatness of benthivorous fishes reduced, and they do not visited by these areas, even if they are traditionally feeding areas. When such processes take place in the wintering grounds of seals, then due to a sharp decrease in the food base during the whelping and feeding after 5-8 years the number and production of seals sharply decreases. The tendency for hypoxia develops in the bottom layers of water with the activation of earthquakes is observed.

1. Patin S.A. Ecological problems of development of oil and gas resources of the sea shelf. Moscow: Izd. VNIRO, 1997. 349 p.
2. Romodonovskaya M.A., Zaitsev V.A., Malyutin O.I. The newest faults as a trend geopathogenic factor affecting the development of benthic communities of the Kandalaksha Gulf of the White Sea // System Earth. Unconventional questions of geology. Materials of scientific seminars. M. 1999. P. 218-224.
3. Lyushvin PV, Karpinsky M.G. The causes of sharp reductions in the biomass of zoobenthos and their consequences // Fishery. 2009. № 5. P.65-69.
4. Smirnova L.V. state of zoobenthos of the Northern Caspian in the end of the 80s // Marine hydrobiological research. M.: VNIRO. 2000. P. 103-110.
5. Lyushvin P.V. Rivets on Earth Sciences. The result of the construction of paradigms in the status of axioms in geophysics and hydrobiology // M. Edition of the author, 2016. 147p. Fixed network address: http://nadisa.org/download/lyushvin_book.pdf. (In Russian).