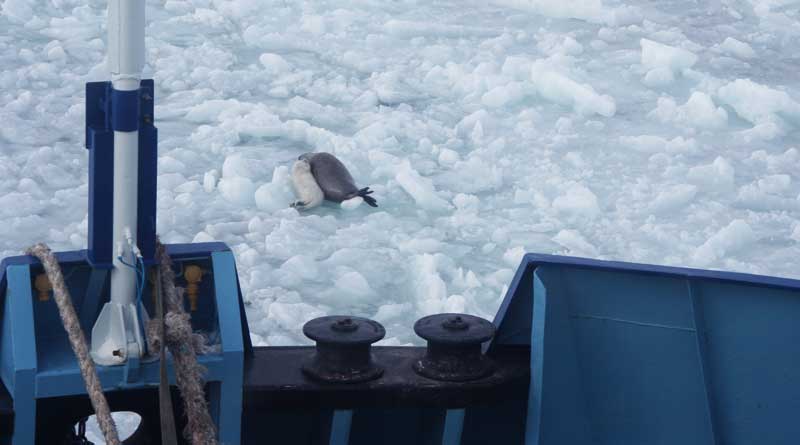 Icebreaker operations in the Arctic and other areas are increasing rapidly to support new industrial activities and shipping routes, but the impact on pinnipeds in these habitats is poorly explored. We present the first quantitative study of icebreakers transiting ice-breeding habitat of a phocid seal and recommendations for mitigation. Impacts were recorded from the vessel bridge during seven ice seasons 2006–2013, for Caspian seals (Pusa caspica) breeding on the winter ice-field of the Caspian Sea.

Impacts included displacement and separation of mothers and pups, breakage of birth or nursery sites and vessel-seal collisions. The flight distance of mothers with pups ahead was< 100 m, but measurable disturbance occurred at distances exceeding 200 m. Separation distances of pups from mothers were greatest for seals < 10 m to the side of the vessel, and declined with increasing distance from the vessel. The relative risk of separation by ≥ 20 m was greatest for distances < 50 m from the vessel path. Seals on flat ice were more likely to be separated or displaced by ≥ 20 m than seals in an ice rubble field. The relative risk of vessel collisions with mothers or pups was significantly greater at night when breaking new channels (12.6 times), with vessel speeds ≥ 4 kn (7.8 times).

A mitigation hierarchy is recommended for the Caspian Sea which could be applied to Arctic pinnipeds, including reducing icebreaker transits during critical periods, and using data from aerial surveys to plan routes to minimise encounters with seals. Where pre-emptive avoidance is not possible, recommendations include maintaining a safe separation from breeding seals at least 50 m beyond the distance at which measurable disturbance occurs, speed limits, use of thermal imaging at night, dedicated on-board seal observers, and training of vessel officers to take effective reactive measures…

The photo was submitted by Simon Goodman.