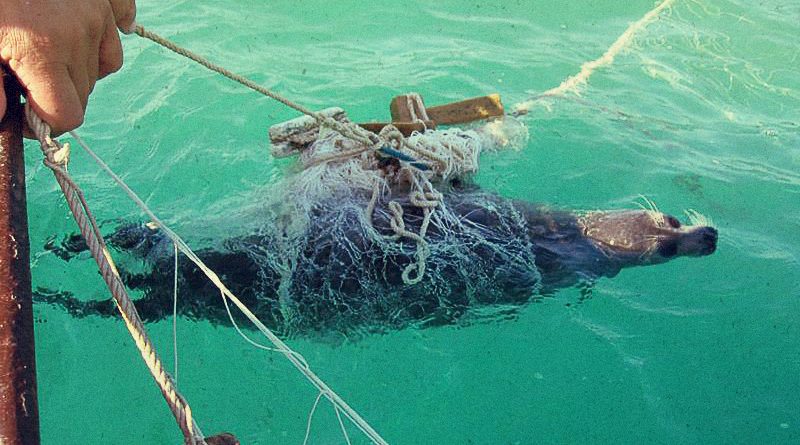 In Astrakhan, on the 8th and 9th of October, participants of International Caspian seals Conservation Project met with students of Astrakhan State University and schoolchildren. Within the framework of the International Biodiversity Day celebration, Lenie ‘t Hart, the Director of Lenie ‘t Hart Seal Foundation (the Netherlands), and Amir Sayad Shirazi, the General Director of Caspian Seal Rehabilitation and Research Centre (Iran), told students why it was important to concern about the fate of Caspian seals: according to official data, these animals were threatened with extinction. Leni and Amir are confident that the citizens of all the Caspian states – not only of Russia and Iran, but also of Kazakhstan, Azerbaijan, and Turkmenistan – should change their attitude to these animals as soon as possible. Otherwise, after 10-15 years, Caspian seals might repeat the fate of the Steller’s sea cow, the dodo and Bali tiger – that is completely disappear from the face of the earth.

‘I will not tell you what to do, but I will tell you what we are doing in our country to save seals’, started her speech Lenie ‘t Hart. Her work for the conservation of seals began in 1971: the woman placed her first rescued animal in a bath in the backyard of her house. Now thousands of seals rescued from death are on her and her colleagues “account”.

Climate change, diseases, catching by hunters, pollutions weaken the immune system of Caspian seals – these are not all the factors affecting the population. According to a study conducted by British and Irish scientists, the population number in 2009 was estimated at 100 thousand. This year, figures 60-70 thousand seals were announced – that is, according to Amir Sayad Shirazi’s data, just for a few years, the number has decreased by one third.

‘The situation that has developed with the seals now concerns all the Caspian countries. And our task is not only to urgently protect the population, but also to solve the problem with the Caspian Sea biological resources, because everything is interconnected here. We are worried if urgent action is not taken, then, knowing even approximate figures of the annual reduction of the Caspian seals population – it is from 2 to 8-10 thousand animals a year – we could lose these animals in a few years. They might be extinct in 8-10 years, the population will reach such a size that the reproduction will be very difficult’, said Dr. Amir Sayad Shirazi, the General Director of the research and rehabilitation center in Iran, where dozens of Caspian seals are rescued annually.

During their speeches, among the main objectives of the conservation project, the experts first called working with people – raising public awareness about these animals, what happens to them, what factors affect the reducing of the population number. They talked also about conducting researches and involving volunteers in the project. According to Lenie ‘t Hart, it is very important to find contact with people who are in close proximity to these animals. ‘We have ensured that fishermen who have killed seals for profit, are now members of voluntary rescue team – it is thousands of people’, said Lenie.

The specialists working at Lenie ‘t Hart’s Seal Rehabilitation and Research Centre emphasize that a rescued seal should be given a name: not for fun, but in order to make an animal in a special register, which also contains all the primary data on a mammal – that will help in the further work.

In his turn, Alexander Pankov, the Deputy Director for General Affairs of the Astrakhanskiy Nature Reserve, PhD, is confident that there is currently insufficient information on this vital topic – a considerable part of people does not even know about the existence of this species. However, according to Pankov, only education work in the Russian Federation is not enough: it is necessary to take practical actions in this direction.

His opinion was supported by pupils and teachers of secondary school № 45, on the basis of which the meeting with representatives of the seals conservation project was held. At the end of the meeting, the students expressed a desire to start collecting signatures for the construction of the seal rehabilitation center – like the Iranian and Dutch – in Russia. Their teachers promised students to help in this.