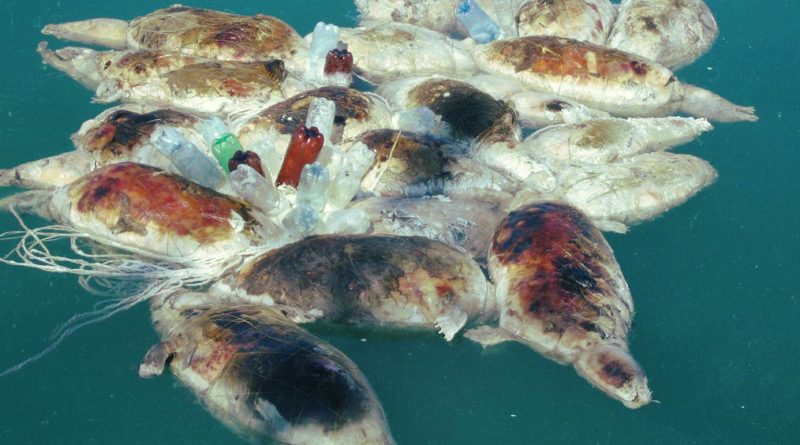 The Caspian seal (Pusa caspica) has declined by more than 90% since 1900 and is listed as endangered by IUCN. We made the first quantitative assessment of Caspian seal by-catch mortality in fisheries in the north Caspian Sea by conducting semi-structured interviews in fishing communities along the coasts of Russia (Kalmykia, Dagestan), Kazakhstan and Turkmenistan. We recorded a documented minimum by-catch of 1,215 seals in the survey sample, for the 2008–2009 fishing season, 93% of which occurred in illegal sturgeon fisheries. Due to the illegal nature of the fishery, accurately quantifying total fishing effort is problematic and the survey sample could reflect less than 10% of poaching activity in the north Caspian Sea. Therefore total annual by-catch may be significantly greater than the minimum documented by the survey. The presence of high by-catch rates was supported independently by evidence of net entanglement from seal carcasses, during a mass stranding on the Kazakh coast in May 2009, where 30 of 312 carcasses were entangled in large mesh sturgeon net remnants. The documented minimum by-catch may account for 5 to 19% of annual pup production. Sturgeon poaching therefore not only represents a serious threat to Caspian sturgeon populations, but may also be having broader impacts on the Caspian Sea ecosystem by contributing to a decline in one of the ecosystem’s key predators. This study demonstrates the utility of interview-based approaches in providing rapid assessments of by-catch in illegal small-scale fisheries, which are not amenable to study by other methods.

Fisheries by-catch of marine mammals, seabirds, and sea turtles is a global problem, and represents a critical threat for many long-lived, slow maturing species [1]; [2]; [3]. Seal-fisheries interaction problems occur everywhere fishing activity and seal habitat overlap, and by-catch is identified as an acute threat for some of the world’s most threatened pinniped species [4]; [5]; [6].

Evaluating by-catch can be challenging due to the logistical constraints on obtaining appropriate data on entanglement and mortality rates. For legitimate fisheries this is often achieved by independent observers recording by-catch from a known proportion of fishing effort in a fishery. However, this approach is labor and cost intensive, and is often supplemented by interviews with fishers. Obtaining information from small-scale fisheries can be more problematic, since these are often inaccessible to observers or are inadequately monitored, yet they comprise the majority of global fishing effort and may generate large by-catches of non-target vertebrates [7]. Illegal fisheries in particular, by their covert nature, generally cannot be observed directly by researchers and so are poorly studied, but they can be the source of significant by-catch. Quantifying by-catch in such fisheries to an approximate magnitude can provide vital information to inform policy decisions in the absence of other data. Direct questioning may be one of the most appropriate methods when resources are limited [8]. Here we show that an interview-based approach can yield data on by-catch in an illegal small-scale fishery over a short period of time, sufficient to estimate minimum annual by-catch rates, to identify high risk gear/location/season combinations, and to prioritize areas for further research.

At the end of the 19th century Caspian seals (Pusa caspica) were abundant with a population size of more than one million [9]; [10]. However, the population has declined by more than 90% since the beginning of 20th century, primarily due to unsustainable harvesting lasting until the 1990s [10]. The total Caspian seal population was estimated at approximately 104,000 in 2005, with an ongoing decline of 3–4% per year [10], [11]. The species is listed as endangered by the International Union for Conservation of Nature (IUCN) [12]. In 2012 the Caspian seal is still considered to be a ‘harvested’ species by the Russian Federation and faces a number of unresolved threats including habitat loss and degradation, disturbance from industrial development, potential decreased food availability due to over-fishing and invasive species, and fisheries by-catch.

From the early 1990s, following the collapse of the Soviet Union, state control of fisheries in the Caspian Sea have been very weak, resulting in a dramatic increase in illegal and unregulated fishing [13]. Extremely high economic values of sturgeon products, reaching up to US$10,000 per kg for beluga caviar, and unstable socio-economic conditions provided opportunities for the development of a substantial black-market. This illegal catch has driven catastrophic declines of all six Caspian sturgeon species reflected in the sharp decrease in sturgeon catch from about 30,000 tonnes annually in the 1900s down to less than 1,000 tonnes in 2007 [13], [14]. All five commercially important Caspian sturgeon species are now listed as critically endangered by IUCN [15]. The sturgeon gear used in illegal fisheries is indiscriminate, and therefore presents a potentially serious by-catch hazard to Caspian seals.

This study aims to quantify by-catch rates in the northern Caspian Sea to understand the potential contribution of by-catch to the ongoing Caspian seal population decline. The results are also essential for developing and implementing effective conservation strategies for Caspian seals, and for providing evidence to incorporate these measures into official policy in the Caspian littoral states, since no quantitative data on the scale of the catch are currently available, and the governments of the Caspian states have not formally recognized the issue…